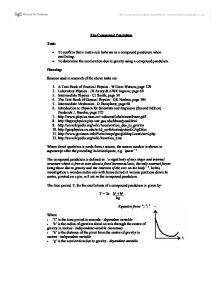 Sources used in research of the above tasks are:

Where direct quotation is made from a source, the source number is shown in superscript after the preceding italicised quote, e.g. ‘quote’4.

The compound pendulum is defined as: ‘a rigid body of any shape and internal structure which is free to turn about a fixed horizontal axis, the only external forces being those due to gravity and the reaction of the axis on the body’ 3. In this investigation a wooden metre rule with holes drilled at various positions down its centre, pivoted on a pin, will act as the compound pendulum.

The value for k is a constant, and consequently can be ignored, causing the equation to take on the form:

This equation relates to that of the simple pendulum, the period of which can be found by 8:

Add blu-tack to one end of the metre rule until it balances horizontally without moving. The centre of gravity of the metre rule is now at 50cm along its length. Suspend the metre rule on the pin at 0.05m from the centre of gravity (i.e. at 45 cm along the metre rule)Cover the exposed end of the pin with another cork. Do not push all the way through.Attach the card to the stand with blu-tack ensuring that the vertical timing line is in line with the retort stand. Displace the metre rule so that it lines up with the starting line on the card. Release the pendulum and begin timing as it passes the vertical retort stand.Stop the timer after 15 oscillations as the pendulum passes the retort stand. (One complete oscillation is from when the pendulum passes the stand to it’s extreme of motion at one side, back past the stand to the other extreme and then back to the stand [See Diagram B (above)])Record the time.Repeat steps 10 - 13 for the same length twice. Carry out additional repeats if any values are more than 0.15s from the others.Repeat steps 10 - 14 for lengths of: 0.1m, 0.15m. 0.2m, 0.25m, 0.3m, 0.35m, 0.4m, and 0.45m from the centre of gravity.For each length of the pendulum, h:

And tabulate the results with these calculated values.

The candidate has not completed the work so has not answered the question. However, this is a great start. The explanation of theory is good, an important step that is often left until conclusions or sometimes omitted at A-level and ...

The candidate has not completed the work so has not answered the question. However, this is a great start. The explanation of theory is good, an important step that is often left until conclusions or sometimes omitted at A-level and should not be. The equation should definitely be in there but doesn't need each stage of rearranging showing, if you feel there is a need to show a proof it should be in an appendix. The method seemed reasonable with a clear understanding of how to limit sources of inaccuracies.

The text has good, relevant physics throughout. It contains good use of references, though these are usually placed at the end of the report. There was no graph, uncertainties or final answer, which made the report less useful.

The spelling, punctuation and grammar appear to be perfect or very close. It is pleasing to see good use of relevant scientific terms being used correctly.