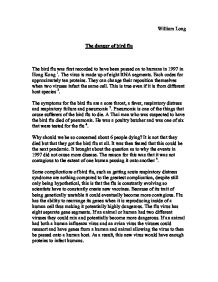 The danger of bird flu The bird flu was first recorded to have been passed on to humans in 1997 in Hong Kong 1. The virus

William Long The danger of bird flu The bird flu was first recorded to have been passed on to humans in 1997 in Hong Kong 1. The virus is made up of eight RNA segments. Each codes for approximately ten proteins. They can change their reposition themselves when two viruses infect the same cell. This is true even if it is from different host species 2. The symptoms for the bird flu are a sore throat, a fever, respiratory distress and respiratory failure and pneumonia 3. Pneumonia is one of the things that cause sufferers of the bird flu to die. A Thai man who was suspected to have the bird flu died of pneumonia. He was a poultry butcher and was one of six that were tested for the flu 4. Why should we be so concerned about 6 people dying? It is not that they died but that they got the bird flu at all. It was then feared that this could be the next pandemic. ...read more.

This has not happened yet although being a few cases of the virus spreading from human to human these were limited in scale. Health officials fear that the avian viruses will find a way of spreading easily among humans. This type of change in influenza viruses is known as an antigenic shift. This happens when an influenza virus subtypes to a virus which humans have little or no defence against, possibly causing a pandemic. The virus is carried mainly in water birds. The bird hosts the virus in their intestine. It can be transmitted to other birds by saliva, nasal secretions and faeces. The most common way of the virus being transmitted is faecal to oral. Domestic birds can also get this virus from cages and bird feed if they are infected. Wild birds that have this disease do not normally suffer from it but can pass it on to other birds. The global effort to avert the spread of bird flu is complicated, centring on the health of both birds and humans. ...read more.

The Vietnamese have killed 825,000 ducks, 470,000 chickens and 500,000 other fowl to prevent further spread of the virus. Health officials say that there have been no further cases since March 16th but they believe that it will come back 7. The vaccines the United States plan to test are thought likely to be ineffective. Even if the result of the vaccination proves positive they will still take too long to produce on a large scale. It will take far too long for enough doses to prevent a pandemic strain affecting humans. Other countries are following more promising approaches but are not ready to start testing them out. Because of the viruses' capability of mutating and affecting humans, many countries have changed strategies. Instead of waiting for a pandemic strain to emerge human vaccines against the current strain are being created. Although these vaccines will not be perfect they are thought to make a difference between life and death. The sooner prototype vaccines are tested the sooner they can be manufactured and can help prevent the virus affect humans 8. ...read more.