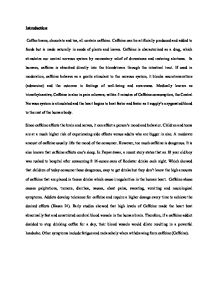 Introduction: Coffee beans, chocolate and tea, all contain caffeine. Caffeine can be artificially produced and added to foods but is made naturally in seeds of plants and leaves. Caffeine is characterized as a drug, which stimulates our central nervous system by momentary relief of drowsiness and restoring alertness. In humans, caffeine is absorbed directly into the bloodstream through the intestinal tract. If used in moderation, caffeine behaves as a gentle stimulant to the nervous system, it blocks neurotransmitters (adenosine) and the outcome is feelings of well-being and awareness. Medically known as trimethylxantive, Caffeine is also in pain relievers, within 5 minutes of Caffeine consumption, the Central Nervous system is stimulated and the heart begins to beat faster and faster as it supply's oxygenated blood to the rest of the human body. Since caffeine affects the brain and nerves, it can affect a person's mood and behavior. Children and teens are at a much higher risk of experiencing side effects versus adults who are bigger in size. A moderate amount of caffeine usually lifts the mood of the consumer. However, too much caffeine is dangerous. It is also known that caffeine affects one's sleep. In Taipei times, a recent story states that an 18 year old boy was rushed to hospital after consuming 8 16-ounce cans of Rockstar drinks each night. Which showed that children of today consume these dangerous, easy to get drinks but they don't know the high amounts of caffeine that are placed in theses drinks which cause irregularities in the human heart. Caffeine abuse causes palpitations, tremors, diarrhea, nausea, chest pains, sweating, vomiting and neurological symptoms. ...read more.

was measured . Data: Graph 1.0: Heart rate of Daphnia versus Concentration of Caffeine Solution Calculations: Determining the amount of caffeine to water ratio: 473 mL of Monster energy drink contains 150 mg . ??= ????/?? 1. 2. 3. 4. 5. 6. Discussion: The results shown in the graph conclude that heart rate does increase when the concentration of caffeine increase in the daphnia's and that caffeine does act like a stimulant. As the concentration of caffeine increases, heart rate of Daphnia increases for caffeine concentration from 44.5 mg/L to 66.6 mg/L because caffeine is a stimulant which raises the heart rate of animals. Likewise, assuming that human's heart will also increase. However there is a decrease in the heart rate for the second and fourth daphnia, this is anomaly and probably occurred because the daphnia had a low temperature or that caffeine didn't affect daphnia because it wasn't in the solution for long enough. Another reason for this anomaly is that class members were using daphnia from the "recovering centre" (the caffeinated daphnia were placed in a new breaker with a cleaner environment so they can overcome the caffeine and be ready to be used again.), maybe the daphnia chosen was still recovering when put in another concentration, which resulted in a low heart rate from the other data. The daphnia probably became tolerant to the caffeine and needed a higher dosage so it's heart rate can go up. The daphnia could have been hurt or damaged when moved from one container to another resulting in lower heart rates as it was dying off. ...read more.

To specify more specific trends in affecting the daphnia's heart rate, repeating the experiment for more than six concentrations can increase the validity. Through the lab's results it is believed that there is a relationship between the daphnia's and humans heart rate therefore if an increase in the daphnia's heart rate is due to high caffeine concentration , then humans also have a high heart rate after consumption of caffeine. This is dangerous as mentioned before because this makes human prone to numerous diseases in the body that correlate with caffeine. First of all, increase in heart rate means that blood is being pumped in the human body at a higher rate which increases the chance of damaged or erupted veins and arteries which further will increases the human's chance of getting atherosclerosis. It is also suggested that caffeine increases the cortisol levels in the human body. Cortisol, known as a stress hormone, if this hormone is too high it can lead to weight gain, diabetes, heart diseases and very rare but possibly Cushing syndrome's (Caffeine, Stress and Your Health - Is Caffeine Your Friend or Your Foe?). Moderate amounts of caffeine do, good for the body as it provides a positive awakening for anything, but too much caffeine can possibly lead to hypertension. As a result, maintaining lifestyle and reducing risks of cardiovascular disease must first lead to the avoidance of caffeinated goods. Ultimately, it will be beneficial to one's life as it will decrease the high heart rates and therefore decreasing the possible threats of caffeine intake mentioned above. Furthermore, this experiment can be used, replacing caffeine with nicotine, alcohol or other drugs or even temperature and then determining their effects on the daphnia. ...read more.

***
There are some major flaws in the method and a lack of detail on the biology and control of heart rate in Daphnia.