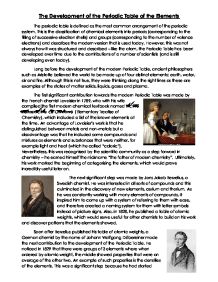 The Development of the Periodic Table of the Elements

The Development of the Periodic Table of the Elements The periodic table is defined as the most common arrangement of the periodic system. This is the classification of chemical elements into periods (corresponding to the filling of successive electron shells) and groups (corresponding to the number of valence electrons) and describes the modern version that is used today. However, this was not always how it was structured and described - like the atom, the Periodic Table has been developed over time due to the contributions of a number of scientists (and is still developing even today). Long before the development of the modern Periodic Table, ancient philosophers such as Aristotle believed the world to be made up of four distinct elements: earth, water, air and fire. Although this is not true, they were thinking along the right lines as these are examples of the states of matter solids, liquids, gases and plasma. The first significant contribution towards the modern Periodic Table was made by the French chemist Lavoisier in 1789, who with his wife compiled the first modern chemical textbook named Traite Elementaire de Chimie (Elementary Treatise of Chemistry), which included a list of the known elements at the time. ...read more.

He went a step further and numbered them in order of increasing atomic weight, so that it was clear just by looking at the elements. This was an important step forward but unfortunately there were limitations to his work. Firstly, he did not leave gaps in his version of the table, so new elements had no placement and would need a completely new table to be devised to accommodate them. Secondly, there were many groupings in his table where there are no obvious similarities. Some of his elements were later discovered to actually be compounds, for example "didymium", which was actually a mixture of praseodymium and neodymium. Additionally, his use of the word "octave" led to other scientists making a mockery of him and his work as this was a musical term, so they were not able to fully appreciate his work. The most famous contribution to the Periodic Table was by Dmitri Ivanovich Mendeleev, the Russian chemist whose name is attributed to the table. Independently of Newlands, he published his own version of the Periodic Table, which was more advanced than any at the time. ...read more.

Now the electronic structure of the elements could be used to explain their properties, and scientist could say why certain elements behaved the way they do. Furthermore, this alteration was more robust as the Periodic Law now did not have any exceptions to it. Another contribution was by the American scientist Glenn Seaborg, who discovered the heavy elements from plutonium (atomic number 94) to nobelium (atomic number 102). He placed the actinide series below the lanthanide series in the Periodic Table as well - a logical arrangement. Nowadays, the Periodic Table continues to develop with new discoveries of elements beyond atomic number 104 (rutherfordium) and an increased understanding of atomic structure as a result of developments by Quantum physicists such as Neils Bohr (e.g. discreet quantization) and Wolfgang Pauli (e.g. the Pauli Exclusion Principle). The Periodic Table now includes electronic configurations and the elements' properties can therefore be explained further. The Periodic Table continues to develop quickly (for example, my Periodic Table poster is now outdated, despite being published only in 2006); it will be interesting to see how the Periodic Table of the Elements develops in the future. ...read more.

This essay starts well, the introduction describes the periodic table and the candidate states the way in which the elements are classified. However it could be improved by the candidate making it clear that they planed to discuss how the ...

The candidate gives a clear and detailed account of the way in which the periodic table was developed. The candidate has clearly taken the time to research this topic extensively which is shown by the addition of a bibliography starting the resources that the candidate has used. Furthermore the candidate has taken the time to right up a account in their own words, which is evident by the language used, this demonstrates a good understanding of this topic. Finally, the candidate ends this essay with an appropriate conclusion, they state that the future will see further developments and they add a personal touch, you should always try to give a personal reaction. However, the conclusion could be improved by summarising the key facts, perhaps by listing the scientists involved in developing the periodic table with a brief sentence on each, this allows you to tie up loose ends and bring everything together, which helps draw the essay to a close.

This essay is very well written, it is easy to follow and the information is provided in a clear and coherent manor. In addition to this there are no obvious issues with spelling punctuation or grammar.