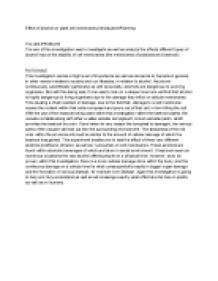 The effect of alcohol on the stability of cell membranes-plan for an experiment.

Transfer-Encoding: chunked ﻿Effect of alcohol on plant cell membranes-Introduction/Planning The AIM/PROBLEM The aim of this investigation was to investigate as well as analyze the effects different types of alcohol has on the stability of cell membranes (the membranes of potatoes and beetroot). RATIONALE This investigation carries a high level of importance as well as relevance to humans in general, in other words it relates to society and our lifestyles, in relation to alcohol. As proven continuously, scientifically (generally) as well as socially, alcohols are dangerous to us living organisms. But with this being said, if one was to look on a deeper level one will find that alcohol is highly dangerous to living organisms due to the damage they inflict on cellular membranes. This causing a chain reaction of damage, due to the fact that, damage to a cell membrane means the content within that cells is exposed and pours out of that cell, in tern killing the cell. With the use of the example being used within this investigation within the beetroot plants, the vacuole consists-along with other a water-soluble red pigment, known as betacyanin, which provides the beetroot its color. ...read more.

So for the section of which involves the beetroots, when the red-like pigment (from the beetroot) leeks into the alcohol/solution, the alcohol/solution will turn red. As stated previously the strength of the colour within the solution must be similar to the amount of cellular damage the beetroot has sustained. With this being said, as the concentration of pigment within the solution increases, the intensity of the the light of which is able to pass through the solution decreases. Equipment Chemical/liquid Alcohol Concentration (%) Methanol (50 ml of each concentration) 0 20 40 60 Ethanol (50 ml of each concentration) 0 20 40 60 1-Propanol (50 ml of each concentration) 0 20 40 60 Biological 5 Beetroots (canned or fresh) 5 Potato Glassware 54 test tubes 10 ML (glass) measuring cylinder Other equipment Gloves White tile Marker Forceps Marker Stop watch Test tube rack Balance Cork borers (6) Distilled water Scalpel Weighing boats Colorimeter Ruler Face mask HYPOTHESIS: -Potato It is uncertain to know the concrete possible outcome of how the weight will change for any of the concentrations being used, or if there will be a change at all. ...read more.