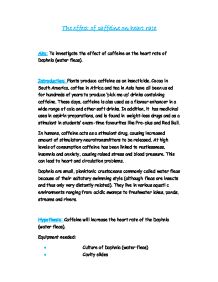 The effect of caffeine on the heart rate

The effect of caffeine on heart rate Aim: To investigate the effect of caffeine on the heart rate of Daphnia (water fleas). Introduction: Plants produce caffeine as an insecticide. Cocoa in South America, coffee in Africa and tea in Asia have all been used for hundreds of years to produce 'pick me up' drinks containing caffeine. These days, caffeine is also used as a flavour enhancer in a wide range of cola and other soft drinks. ...read more.

Trial 1 Trial 2 276 241 100 180 156 50 65 72 0 This graph shows that as the concentration of caffeine increases the heart rate increases too. Conclusion: Daphnia are small, planktonic crustaceans commonly called water fleas. I believe my hypothesis are right shown that my results presents that. Caffeine acts as a stimulant drug, causing increased amount of stimulatory neurotransmitters to be released therefore the heart rate increases. My results may not be 100% accurate due to the change of temperature in the room. My results are reliable because I repeated twice and the difference between them is not too big therefore my results are valid. ...read more.

The piece is done well. Whilst simplistic in format the essay has components of research and analysis of the results which are presented well. Expansion on the conclusion and evaluation are needed to show a deeper understanding and improvement of ...

The piece is done well. Whilst simplistic in format the essay has components of research and analysis of the results which are presented well. Expansion on the conclusion and evaluation are needed to show a deeper understanding and improvement of the experiment.

The introduction and aim are done well, and define the effects of caffeine that the candidate would expect to see in the daphnia, although they do not use any research that has previously been used on the fleas which would have been good for the author to use this in the background to the water fleas to adjust their hypothesis if needed and work out dosages for the fleas. I'm not sure how well the results can be assessed because the amount of beats assessed under a microscope on that small a specimen would be inaccurate. However, the graphs are good as they show a good correlation between their research and what actually happened. They do not show any improvements for the experiment which would have been good to show a deeper understanding of the principles behind the experiment.

Punctuation, grammar and spelling all good. Tone and format of the piece correct and clear.