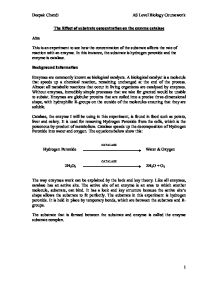 The Effect of substrate concentration on the enzyme catalase

The Effect of substrate concentration on the enzyme catalase Aim This is an experiment to see how the concentration of the substrate affects the rate of reaction with an enzyme. In this instance, the substrate is hydrogen peroxide and the enzyme is catalase. Background Information Enzymes are commonly known as biological catalysts. A biological catalyst is a molecule that speeds up a chemical reaction, remaining unchanged at the end of the process. Almost all metabolic reactions that occur in living organisms are catalysed by enzymes. Without enzymes, incredibly simple processes that we take for granted would be unable to subsist. Enzymes are globular proteins that are coiled into a precise three-dimensional shape, with hydrophilic R-groups on the outside of the molecules ensuring that they are soluble. Catalase, the enzyme I will be using in this experiment, is found in food such as potato, liver and celery. It is used for removing Hydrogen Peroxide from the cells, which is the poisonous by-product of metabolism. Catalase speeds up the decomposition of Hydrogen Peroxide into water and oxygen. The equations below show this: CATALASE Hydrogen Peroxide Water & Oxygen CATALASE 2H2O2 2H2O + O2 The way enzymes work can be explained by the lock and key theory. Like all enzymes, catalase has an active site. The active site of an enzyme is an area to which another molecule, substrate, can bind. It has a lock and key structure because the active site's shape allows the substrate to fit perfectly. ...read more.

Also the readings could be affected by my speed of reaction of reading off the measuring cylinder. * The precision of measuring the amounts of hydrogen peroxide, liver and water I used each time could have also affected my results, as it was difficult to be completely accurate. To make the measurements more accurate I could have used pipettes rather than pouring the hydrogen peroxide and water. Improvements If I had the time I would do more repeats at each of the concentrations of hydrogen peroxide. This would make the average I took more accurate as it would mean errors, which could have been made in one experiment, would not affect the over all result so much. Also to improve this experiment I should extend it to include more time intervals. I think if I had continued to take readings every 10 seconds for another minute it would have produced a better graph as my curve would have flattened off more as the solution became saturated. I could repeat this experiment for more concentrations of hydrogen peroxide so I could have more rates of reaction to compare. This would make my results more reliable. I conclude that my final conclusion is valid because the evidence shows that my prediction was correct. This is seen in my results, on the graph it shows that the 100% concentration of hydrogen peroxide has the fastest rate of reaction. I feel that any uncertainties play little affect in making my conclusion any less valid as they can be justified by the inaccuracies I stated at the start of this evaluation. Deepak Chandi AS Level Biology Coursework 1 ...read more.