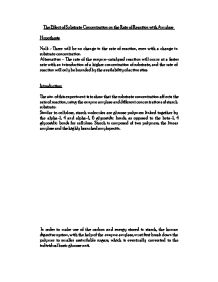 The Effect of Substrate Concentration on the Rate of Reaction with Amylase Hypothesis: Null: - There will be no change in the rate of reaction, even with a change in substrate concentration. Alternative: - The rate of the enzyme-catalysed reaction will occur at a faster rate with an introduction of a higher concentration of substrate, and the rate of reaction will only be bounded by the availability of active sites. Introduction: The aim of this experiment is to show that the substrate concentration affects the rate of reaction, using the enzyme amylase and different concentrations of starch substrate. Similar to cellulose, starch molecules are glucose polymers linked together by the alpha-1, 4 and alpha-1, 6 glycosidic bonds, as opposed to the beta-1, 4 glycosidic bonds for cellulose. Starch is composed of two polymers, the linear amylose and the highly branched amylopectin. In order to make use of the carbon and energy stored in starch, the human digestive system, with the help of the enzyme amylase, must first break down the polymer to smaller assimilable sugars, which is eventually converted to the individual basic glucose unit. Alpha-amylase will be used in the experiment. This hydrolyses alpha 1.4 glycosidic bonds within starch to form smaller sugars. It is important to know we are using alpha-amylase and not beta- amylase. The latter will only produce disaccharides, as it is an alternate enzyme. Human saliva and pancreatic secretion contain a large amount of alpha-amylase for starch digestion. Amylase is a tertiary-structured protein, which means it has a globular shape therefore making it a globular protein. Proteins are made up of amino acids, which are monomers. Condensation reactions between amino acids result in peptide bonds. When more amino acids join together via peptide bonds it creates a chain of monomers, or a polymer. This is called a polypeptide chain. The polypeptide chain is then folded, branched and linked at different areas, which gives it a globular shape, becoming a protein. ...read more.

Test tubes, test tube racks. The test tubes are to be used as the medium for the reaction. Also, separate test tubes will be used to mix up the different concentrations of the starch solutions. The test tube racks will be needed when the test tubes are not. Water bath 60oC. The water bath must be used to ensure that the temperature of the enzyme is kept constant. 60 degrees C is the desired temperature for amylase as this is its optimum reactivity temperature. Variations in temperature would result in changes in reactivity and would therefore produce invalid results. The amylase and starch will be placed in the water bath, in separate test tubes, before the experiments begin, to ensure the whole experiment takes place at the required temperature. Iodine. This will be used to test the presence of glucose. The colour of the iodine will start as a . Iodine will stunt the reaction of the amylase on the starch and so the drops placed in the iodine will not continue to produce glucose, and so the iodine will not continue to change colour. Pipettes. In order to extract a small volume from the test tubes every thirty seconds a pipette will be needed. Two drops will be added to the iodine in the dropper palette. The pipette could also be used to stir the solution before extraction. Stopwatch. Every thirty seconds a sample of the solution will be extracted and dropped into the iodine solution. In order to know when thirty seconds is up, a stopwatch must be used. If the timing were estimated then results would be inaccurate and unreliable. Thermometer. The thermometer is needed to ensure that the water bath is at the correct temperature throughout the experiment. Fluctuations in temperature could cause inaccurate results. Syringes. Needed when the solutions are being diluted. Small volumes of water and starch need to be added together. ...read more.

As this experiment relies upon human perception, due to its qualitative nature, variability is bound to occur due to differences in human perception. A perfect graph for this experiment would theoretically look like this: Reliability and Accuracy. Inevitably this experiment will have a degree of inaccuracy and unreliability, as it involves human perception. But as the graph of results show, there is a strong correlation and a good trend, so we can assume that the experiment was, to a degree, successful and reliable. Also the experiment was repeated four times to gain an average and from these experiments there was only one anomalous result present, which shows consistency and reliability. Therefore due to the reliability of the experiment, the conclusion drawn from it proves to have a reliable source. Limitations. 1. accuracy of human involvement 2. time 3. ethics and morality 4. safety concerns Human involvement limits the accuracy of the results and time limits the range of results being more expansive. Further investigations: As explained above, this kind of experiment relying upon human perception gives results that are the opinion of the experimenter and not discrete results, i.e., one value or another. As a result, further experiments testing the rate of reaction of substrate concentration and amylase will have to involve a way of measuring the glucose concentration produced from the reaction. This experiment would also show that the rate of reaction increases as substrate concentration increases, but it would have quantitative results, which are more reliable, instead of qualitative, based upon opinion. Further experiments could involve changing the amylase concentration, whilst the substrate concentration remains constant. Results would show that the rate of reaction increases as the enzyme concentration increases and would only be bounded by the availability of substrate to break down. Varying the temperature of the experiment would discover the optimum temperature of amylase. The rate of reaction would be fastest at 60 degrees C, and would become slower the further away from 60 degrees C the temperature was, and could even denature the enzyme at excessive temperatures. ...read more.