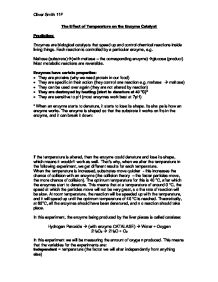 The Effect of Temperature on the Enzyme Catalyst

The Effect of Temperature on the Enzyme Catalyst Prediction: Enzymes are biological catalysts that speed up and control chemical reactions inside living things. Each reaction is controlled by a particular enzyme, e.g. Maltose (substrate)-->(with maltase - the corresponding enzyme)-->glucose (product) Most metabolic reactions are reversible. Enzymes have certain properties: * They are proteins (why we need protein in our food) * They are specific in their action (they control one reaction e.g. maltase --> maltose) * They can be used over again (they are not altered by reaction) * They are destroyed by heating (start to denature at 40oC)* * They are sensitive to pH (most enzymes work best at 7pH) * When an enzyme starts to denature, it starts to lose its shape. Its shape is how an enzyme works. The enzyme is shaped so that the substrate it works on fits in the enzyme, and it can break it down: If the temperature is altered, then the enzyme could denature and lose its shape, which means it wouldn't work as well. That's why, when we alter the temperature in the following experiment, we get different results for each temperature. ...read more.

Using the scalpel, cutting tile and electronic scales, we cut and weighed 12 pieces of liver, all 2g each. We tried to make them roughly the same shape, so they had the same surface area and would react evenly. We then put them all in boiling tubes, and put them into groups of three, each group would be heated or cooled to a different temperature - 2oC (in ice), 22oC (room temperature), 40oC (in water bath), 60oC (in water bath). For the ice and water bath, they will be stood in a test tube rack, with the liver submerged in the water in each case. They should be left in there for a minimum of 20 minutes, so the liver pieces are at the right temperature. One at a time, we put a boiling tube into the set up above, and measured 10cm3 of hydrogen peroxide in a measuring cylinder. We then poured the hydrogen peroxide into the tube, and immediately put the bung in the top and started the stopwatch. We would time it for one minute. Once the minute was up, we would record the level, then disconnect the equipment. ...read more.

To improve this experiment, more accurate equipment is required, and the liver must be kept the same (we had to change it because the original had gone off - so this means the experiment will have to be done in a few days). Further investigations could be into different temperatures, or trying to alter a different factor, like surface area. Will cutting the liver up into smaller pieces make it react better? - according to the particle collision theory it should, but does it in practice? Another experiment could be trying to find the relation between the amount of liver, and the oxygen given off, so you could predict what results you would get with different amounts of liver and different temperatures - will it work in a ratio? You could also try the same experiment with potato or celery, which produces catalase, and may be easier to shape and control surface area. I could also do additional experiments with different enzymes, instead of amylase, for example, protease or maltase. I could then plot the results of those experiments with those of amylase to see if all enzymes work at the same optimum conditions. Oliver Smith 11F ...read more.