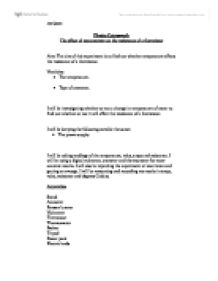 Aim: The aim of this experiment is to find out whether temperature affects the resistance of a thermistor.

I will be keeping the following variable the same:

I will be taking readings of the temperature, volts, amps and resistance. I will be using a digital voltmeter, ammeter and thermometer for more accurate results. I will also be repeating the experiment at least twice and getting an average. I will be measuring and recording my results in amps, volts, resistance and degrees Celsius.

This diagram shows the apparatus set up:

I predict that the graph will look something like this:

In my prediction I have stated that a change in temperature will affect the resistance of the thermistor.

The electrons in the heat energy produce resistance in the electrical circuits. We can measure ho w many electrons have effected the thermistor by measuring the current and the voltage.

The current and voltage of an electric circuit, is given by the formula V=IR. This is known as Ohms. Ohm´s Law is only applicable, when the temperature of the resistor is kept constant. Therefore Ohms law is only applicable to Ohmic conductors. Examples of Ohmic conductors are metals and alloys at constant temperatures. Anything that doesn’t obey Ohms law, are know as non-Ohmic Conductors.

My prediction says that the resistance will decrease with an increase of temperature I can now verify that with the help of my results and graph.

In all I think my experiment was very successful.  I did not run into any difficulties except for one minor problem. This problem was not picked up in my preliminary experiment but was a factor that affected my main experiment. This problem was that the volt meter was dysfunctional at the temperature of 80 degrees or above.  The results I obtained were all of a good quality.  I believe they are of good quality as I had just one result that showed up to be out of place.  All of the other readings again correspond to my prediction and analysis.  The one odd result was probably due to an inaccurate reading of the ammeter or the voltmeter.  Although I feel that my experiment was successful if I were to do it again I would change one or two things. One of these things would be repeating the experiment at least five times and finding averages.