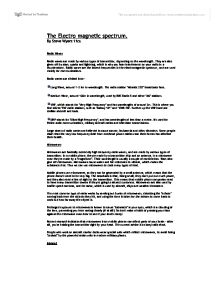 Radio waves are made by various types of transmitter, depending on the wavelength. They are also given off by stars, sparks and lightning, which is why you hear interference on your radio in a thunderstorm. Radio waves are the lowest frequencies in the electromagnetic spectrum, and are used mainly for communications.

Radio waves are divided into:-

Medium Wave, around 100m in wavelength, used by BBC Radio 5 and other "AM" stations.

VHF, which stands for "Very High Frequency" and has wavelengths of around 2m. This is where you find stereo "FM" radio stations, such as "Galaxy 101" and "GWR FM". Further up the VHF band are civilian aircraft and taxis.

UHF stands for "Ultra High Frequency", and has wavelengths of less than a metre. It's used for Police radio communications, military aircraft radios and television transmissions.

Large doses of radio waves are believed to cause cancer, leukaemia and other disorders. Some people claim that the very low frequency field from overhead power cables near their homes has affected their health.

Microwaves are basically extremely high frequency radio waves, and are made by various types of transmitter. In a mobile phone, they're made by a transmitter chip and an antenna, in a microwave oven they're made by a "magnetron". Their wavelength is usually a couple of centimetres. Stars also give off microwaves.

People who work on aircraft carrier decks wear special suits which reflect microwaves, to avoid being "cooked" by the powerful radar units in modern military planes.

Infra-red waves are just below visible red light in the electromagnetic spectrum ("Infra" means "below"). You probably think of Infra-red waves as heat, because they're given off by hot objects, and you can feel them as warmth on your skin. Infra-Red waves are also given off by stars, lamps, flames and anything else that's warm - including you. Infra-red waves are called "IR" for short.
They are used for many tasks, for example, remote controls for TVs and video recorders, and physiotherapists use heat lamps to help heal sports injuries.

Because every object gives off IR waves, we can use them to "see in the dark". Night sights for weapons sometimes use a sensitive IR detector.
Remember the film, "Predator"?

Apart from remote controls, one of the most common modern uses for IR is in the field of security. "Passive Infra-Red" (PIR) detectors are used in burglar alarm systems, and to control the security lighting that many people have fitted outside their houses. These detect the Infra-Red emitted by people and animals. You've probably seen TV programmes in which police helicopters track criminals at night, using cameras which can see in the dark. These cameras use Infra-Red waves instead of "ordinary" light, which is why people look bright in these pictures.

Gamma rays are given off by stars, and by some radioactive substances. They are extremely high frequency waves, and carry a large amount of energy. They pass through most materials, and are quite difficult to stop - you need lead or concrete in order to block them out. Because Gamma rays can kill living cells, they are used to kill cancer cells without having to resort to difficult surgery. This is called "Radiotherapy", and works because cancer cells can't repair themselves like healthy cells can when damaged by gamma rays. Getting the dose right is very important! A tracer is something doctors can put slightly radioactive substances into a patient's body, then scan the patient to detect the gamma rays and build up a picture of what's going on inside the patient.
This is very useful because they can see the body processes actually working, rather than just looking at still pictures.

Example of a tracer:

the picture below is a "Scintigram", and shows an asthmatic person's lungs. The patient was given a slightly radioactive gas to breathe, and the picture was taken using a gamma camera to detect the radiation. The colours show the air flow in the lungs: 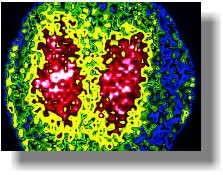 Gamma rays cause cell damage and can cause a variety of cancers. They cause mutations in growing tissues, so unborn babies are especially vulnerable.

Although the candidate discusses all of the electromagnetic waves, the essay just focuses on the main body of information and there is no introduction. Having an introduction is crucial, it sets the tone for the whole essay, it should summarise ...

Although the candidate discusses all of the electromagnetic waves, the essay just focuses on the main body of information and there is no introduction. Having an introduction is crucial, it sets the tone for the whole essay, it should summarise what you plan to look at and provide a context for your essay. It gives you a chance to catch the readers attention and indicate what you plan to discuss. However the candidate gives a fairly explicit response, s/he mentions uses for each of the EM waves as well as how they are formed. There is also evidence of independent research, a good of example of this is when the candidate discusses in detail the various types of wavelengths of radio waves and how they are used. This shows knowledge beyond that expected for this level of qualification, therefore shows the candidateÃ¢â‚¬â„¢s interest and makes the essay more enjoyable for the reader. In addition the candidate attempts to engage with the reader, by making the odd joke and asking questions, again this makes the essay more enjoyable to read, although itÃ¢â‚¬â„¢s best to keep this to a minimum or you risk sounding too informal. The candidate has made a very good attempt at discussing the electromagnetic waves, however they fail to mention the properties of all electromagnetic waves, such as the fact that they can travel through a vacuum this is because they are transverse waves (which means they oscillate at right angles to their direction of propagation) and they all travel at the speed of light.

The candidate shows a good level of understanding and goes into suitable depth when discussing each of the electromagnetic waves. S/he attempts to give additional information for each and goes beyond the subject knowledge required at this level. To achieve a higher grade, the candidate could have explored topics beyond the main essay question, for example they could have gone on to discuss polarisation. This links together nicely as EM waves are transverse waves and only transverse waves can be can be polarised. This level of analysis indicates the candidateâ€™s breadth of knowledge and again illustrates an interest in their subject. Unfortunately the candidate fails to conclude this piece of work, a conclusion is necessary in an essay, it allows you to draw your work to a close and end on a suitable point. Without a conclusion the essay just stops and the reader can often be left feeling confused. A good conclusion summarises your key points and includes personal opinions on the essay topic. I understand that this can be difficult in Science, but it doesnÃ¢â‚¬â„¢t need to be long, and it is good practice to have a conclusive paragraph.

The language used by the candidate is often a little colloquial, which is great if the target audience is A-level students, but if this is supposed to be a piece of coursework, then formal language would be more appropriate. There is little issue with spelling and grammar, and for the most part punctuation is used in an acceptable manner. However, s/he does get a bit carried away with the use of exclamation marks, which should be avoided when writing an essay. Overall this is a good quality essay, it is informative, and the candidate clearly shows their knowledge of the subject. In addition the candidate has undergone independent research and indicates their interest in their subject.