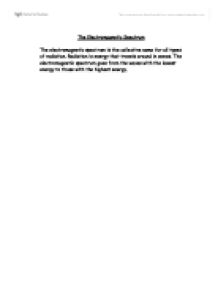 Radio waves are used for many different jobs:

Humans, at normal body temperature, radiate most strongly in the infrared at a wavelength of about 10 microns. (A micron is the term commonly used in astronomy for a micrometer or one millionth of a meter.) This image shows a man holding up a lighted match! The warmest areas in this picture are white and the coldest are blue.

To make infrared pictures special cameras and film are used, that detect differences in temperature, and then assign different brightness’ and colours to them. This provides a picture that our eyes can interpret. It is such an effective way of detecting people the police are now using infrared cameras to find criminals in the dark. 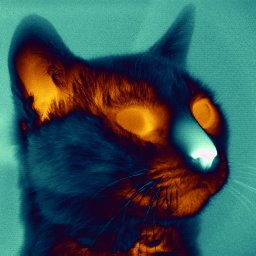 The image at the left shows a cat taken with an infrared camera. The orange areas are the warmest and the white-blue areas are the coldest. This image gives us a different view of a familiar animal as well as information that we could not get from a visible light picture.

Humans may not be able to see infrared light, but snakes like rattlesnakes, have sensory "pits", which are used to image infrared light. This allows the snake to detect warm-blooded animals, even in dark burrows. Snakes with two sensory pits are even thought to have some depth perception using infrared!

Gamma rays have the smallest wavelengths and the most energy of any other wave in the electromagnetic spectrum. These waves are generated by radioactive atoms and in nuclear explosions.

Instruments aboard high-altitude balloons and satellites like the Compton Observatory provide our only view of the gamma-ray sky.

Gamma rays are the most energetic form of light and are produced by the hottest regions of the universe. Things like supernova explosions (the way massive stars die), neutron stars and pulsars, and black holes are all sources of gamma rays.

Unlike optical light and X-rays, gamma rays cannot be captured and reflected in mirrors. The high-energy photons would pass right through such a device. So gamma ray astronomy took along time (in comparison to other forms of astronomy) to develop. 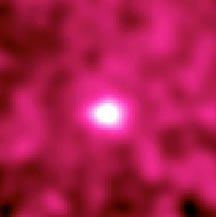 If you could see gamma rays, the night sky would look strange and unfamiliar.

This gamma ray moon picture just looks like a round blob - lunar features are not visible. In high-energy gamma rays, the Moon is actually brighter than the quiet Sun.

We are still discovering more about gamma rays and they are the most unknown waves of the electronic spectrum. 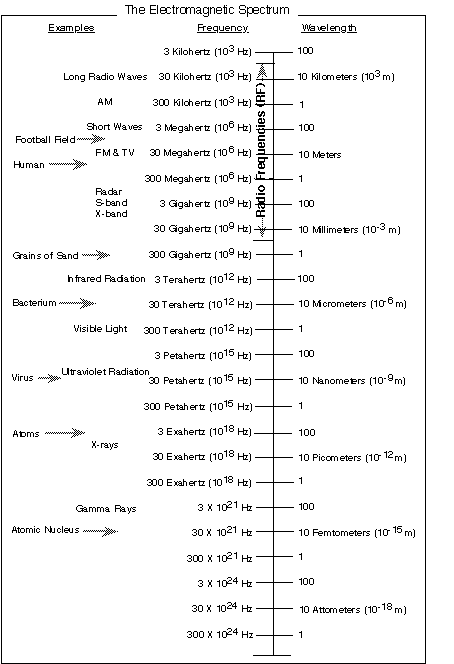 The candidate does introduce the electromagnetic spectrum and they have briefly described what it is. Which is a good start, however an introduction should also clearly state what you plan to discuss. It is also a good opportunity to engage ...

The candidate does introduce the electromagnetic spectrum and they have briefly described what it is. Which is a good start, however an introduction should also clearly state what you plan to discuss. It is also a good opportunity to engage the reader, which you can do by stating an interesting fact or quote relating to your topic. That said, the candidate goes on to give a fairly extensive report of each of the waves within the electromagnetic spectrum. Their response is clear, accurate and interesting to read.

The candidate has clearly undergone independent research to source different pieces of information for each type of the electromagnetic waves, however there are sections which have been copied and pasted from a webpage. I strongly discourage against this, your teacher or examiner is interested in what you have to say on the topic not someone else. It is a good idea to take the time to do research as this can make your essay more interesting to read and it shows a broader knowledge of the subject, however you need to take the time to read over the information and present it clearly in your own words. In addition to this, you should include a bibliography with references to any sources you have used, this should include links to any web pages that you have taken information or images form. That said, the candidates use of images in this pice of writing is appropriate as they fit in well with the candidates information and can make the essay more appealing. Finally the candidate has not written any kind of conclusion, writing a conclusion helps draw the essay to a close and can leave the reader with a good impression of your work. You should summarise your key points and ideas and try to give a personal response to your topic.

This is piece of work is well written, however the information provided is fairly basic and only a few scientific terms are used. However it is clear that the candidate wrote this piece of work while in year 10 and was not an A-level student, therefore the quality of the work is actually of a high standard and includes information that I would not necessary expect a GCSE candidate to know. In addition to this, there are no real issues with spelling, grammar or punctuation.