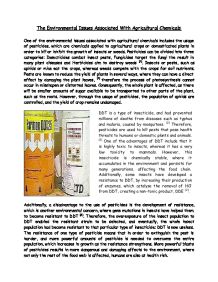 The Environmental Issues Associated With Agricultural Chemicals One of the environmental issues associated with agricultural chemicals includes the usage of pesticides, which are chemicals applied to agricultural crops or domesticated plants in order to kill or inhibit the growth of insects or weeds. Pesticides can be divided into three categories: Insecticides combat insect pests, Fungicides target the fungi the result in many plant diseases and Herbicides aim to destroy weeds (1). Insects or pests, such as aphids or mice eat the crops, whereas weeds compete with the crops for soil nutrients. Pests are known to reduce the yield of plants in several ways, where they can have a direct effect by damaging the plant leaves, (1) therefore the process of photosynthesis cannot occur in misshapen or distorted leaves. Consequently, the whole plant is affected, as there will be smaller amounts of sugar available to be transported to other parts of the plant, such as the roots. However, through the usage of pesticides, the population of aphids are controlled, and the yield of crop remains undamaged. ...read more.

Insecticides are generally non-specific and may kill any insect with contact; therefore, unintended insects such as bees and butterflies are killed. This creates "knock-on-effects" where, in extreme cases, there are so few insects that are potentially useful in the environment, resulting in the failure of plants to get insect pollinated. Another example includes, the pesticide spraying on aphids will eliminate them, however, its natural predators are deprived of food; the ladybird population will suddenly decline and affect the rest of the food chain. Alternatively, a way to overcome these problems with using pesticides to control the pest population is to consider biological control instead of chemical control. Biological control is the use of one species of organism to reduce the numbers of another harmful species of organism (3). An example is to use ladybirds to kill aphids, as it is their natural prey. Although biological control is not completely effective as some crop damage still occurs, however, it is more environmentally and ecologically friendly. Biological control is more focused, as a specific predator preys upon the pest. ...read more.

Additionally, the article also suggests that a scientist has a different explanation: "All that is happening is that plants get a direct supply of carbohydrates and sugar which in turn boosts the plants' immunity and the plantation on the whole ends up yielding a better crop (4)". This article demonstrates that biological control is cheaper and less damaging to the environment in contrast to chemical control, which although very powerful, the impacts on the environment is hazardous. Alternatively, another solution to the dangers pesticides create upon the environment can be to introduce the availability of Genetically Modified crops. Genetically Modified Crops are made for many different purposes, the main one being to create a food able to survive being sprayed with harmful chemicals like pesticides (5). However, there are several heath hazards. In conclusion, potential dangers from the use of pesticide must be evaluated against the advantages of improved crop quality and yield as well as the availability of disease-preventing fresh fruits and vegetables that the use of pesticides has made possible (5). Additionally, there has to be a consideration of the use of biological control such as ladybirds and ants against aphids, which provide a safer way to battle pests than the usage of chemical control. ...read more.