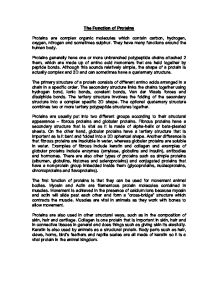 The Function of Proteins

The Function of Proteins Proteins are complex organic molecules which contain carbon, hydrogen, oxygen, nitrogen and sometimes sulphur. They have many functions around the human body. Proteins generally have one or more unbranched polypeptide chains attached 2 them, which are made up of amino acid monomers that are held together by peptide bonds. Although this sounds relatively simple, the shape of a protein is actually complex and 3D and can sometimes have a quaternary structure. The primary structure of a protein consists of different amino acids arranged in a chain in a specific order. The secondary structure links the chains together using hydrogen bond, ionic bonds, covalent bonds, Van der Waals forces and disulphide bonds. The tertiary structure involves the folding of the secondary structure into a complex specific 3D shape. The optional quaternary structure combines two or more tertiary polypeptide structures together. Proteins are usually put into two different groups according to their structural appearance - fibrous proteins and globular proteins. Fibrous proteins have a secondary structure that is vital as it is made of alpha-helix or beta-pleated sheets. On the other hand, globular proteins have a tertiary structure that is important as is it bent and folded into a 3D spherical shape. ...read more.

Hormones are biochemical messengers made of protein and produced by specialized tissues called the endocrine glands. The hormones produced are secreted directly into the bloodstream or other body fluids and sometimes into adjacent tissues. Hormones are used to regulate metabolic activity of some other organs or tissues of the body. An example of a protein hormone would be insulin which is made in the Islets of Langerhans in the pancreas. It is a relatively small protein that comprises 2 polypeptide chains linked with 3 sulphide bonds. Chain A consists of 21 and chain B of 30 amino acids. When it is present in the blood it decreases bloody sugar levels. If insulin was not present the brain would go into hyper-glycemic shock, thus causing brain damage. This makes the protein hormone insulin essential. Proteins are also used in the blood. The main blood plasma proteins are albumins, globulins, and fibrinogen. Albumin is necessary in maintaining osmotic pressure in cells and also acts as a transport protein for various substances. The globulins are usually antibodies and fibrinogen is involved in the clotting process. The antibodies (globulins) are important as they fight off infection in the blood. ...read more.

Once a protein is broken down into its constituent amino acids, the amino acids can become Zwitterions whereby they can release H+ or OH- ions to allow a solution to change pH. If the zwitterion is in a solution with a higher pH that it's isoelectric point, it releases H+ ions from the amine group side so the solution becomes more acidic. If the solution is lower than its isoelectric point it will release OH- ions to make the solution more basic. The final use of proteins is as a storage medium. There are many ways in which this is done in nature, but one of these is the aleurone layer in seeds. This layer contains a lot of protein which is digested by the seed during germination as a source of energy for the growing plant. The aleurone layer is the brown part on cooked rice which gives it its structure. In conclusion, there are many different types of proteins that have different purposes. Proteins can be used in muscle movement (myosin, actin), substance movement around the blood (haemoglobin), active and passive transport (channel proteins) enzymes (amylase), hormones (insulin), structure (collagen and keratin), protection (antibodies and fibrinogen), homeostasis (amino acids) and storage (aleurone layer). ...read more.