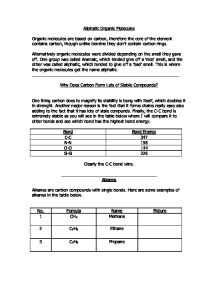 So alkenes are carbon compounds with a double bond. here are some examples in the table below. No. Name Fornula Picture 1 - - - 2 Ethene C2 H4 3 Propene C3 H6 4 Butene C4 H8 5 Pentene C5 H10 I carried out an investigation to do with alkenes and alkanes. My aim was to find out What (if there is one) difference there is in the reactions of the alkanes and alkenes mixed with the same substance. Method: I added cyclohexane(alkane) with bromine and I repeated the experiment with cyclohexene(alkene). At the end of it all the cyclohexane remained brown but the cyclohexene went clear. This shows that the alkenes such as cyclohexene have a double bond in them. What hapeneind is the bromine broke one of the bonds of the cyclohexene and changed place with the broken bond, which caused the colour to go clear. ...read more.