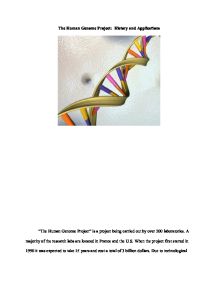 The Human Genome Project: History and Applications "The Human Genome Project" is a project being carried out by over 200 laboratories. A majority of the research labs are located in France and the U.S. When the project first started in 1990 it was expected to take 15 years and cost a total of 3 billion dollars. Due to technological advances the project finished early in 2003, and cost around 3 billion dollars. The project was expected to have a map of all the chromosomes and a position for most of the genes in 1996. The first published results, although not complete were in 1999. Scientists were trying to expand medical knowledge by mapping all of the genes, almost 100,000, in the 23 chromosomes of the human body. They are expecting to understand the origin of, and possibly increase the methods used to cure specific genetic diseases, for example "Leber's congenital amaurosis, a type of inherited childhood blindness" (Hirschler). ...read more.

The NCHGR is just one of twenty-four institutes, center, or divisions that make up the NIH, which is the federal government's central agency for the support of biomedical research. There are at least 18 other countries that have established a human genome project. Even at the beginning of the human genome project it was clearly identified that gaining and using this knowledge would have a large impact for individuals and society. "The effort underway is unlike anything ever before attempted, if successful, it could lead to our ultimate control of human disease, aging, and death" (Lee). Whatever the justification, the human genome project has already inspired society with the hope of "better" babies, and one way to look at this promise of "better" babies is in its social context; parenthood. Parents hope for healthy children, and make such choices as choosing parental care to help "engineer" healthier offspring. ...read more.

Potential medical records will contain a complete genome that will be used to predict responses to certain drugs. This will develop better patient treatment, in helping to look at the patient as a biochemical and genetic individual, which will make treatments more specific, precise, and successful. Currently, an estimated 100,000 people die each year from adverse reactions to drugs and millions of people have uncomfortable and dangerous side effects. More effective drugs are being developed that will help doctor's test individual genetic profiles against a panel of available drugs. This will benefit in the selection of a treatment with the greatest potential benefit (Fast Forward to 2020: What to Expect in Molecular Medicine). The mapping of the human genome is an extraordinary leap in biological science. It has an almost infinite application to medical and research science. The project has and will continue to be the foundation in the creating a healthier, longer, more knowledgeable life for humans. ...read more.