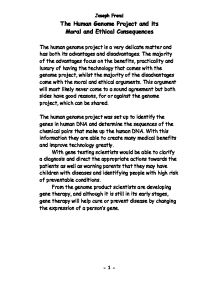 The Human Genome Project and its Moral and Ethical Consequences

The Human Genome Project and its Moral and Ethical Consequences The human genome project is a very delicate matter and has both its advantages and disadvantages. The majority of the advantages focus on the benefits, practicality and luxury of having the technology that comes with the genome project, whilst the majority of the disadvantages come with the moral and ethical arguments. This argument will most likely never come to a sound agreement but both sides have good reasons, for or against the genome project, which can be shared. The human genome project was set up to identify the genes in human DNA and determine the sequences of the chemical pairs that make up the human DNA. ...read more.

From the genome product scientists are developing gene therapy, and although it is still in its early stages, gene therapy will help cure or prevent disease by changing the expression of a person's gene. In the coming years the genome project will open up new possibilities that will help combat disease. By understanding the human genome, scientists will be able to create drugs based upon the proteins, enzymes and RNA, which will lead to more powerful, safer and effective antibiotics, drugs and other medicine, as well as the correct amount in accordance with the patient. ...read more.

Because of limitation of medical testing, there is a chance of laboratory errors due to sample misidentification or other factors. Gene therapy is only at an early stage, however disadvantages have already been noted. Because gene therapy involves changing round of genes it may cause the patient more harm as some genes have more than one function. It is also easy to say that this process involves 'playing God' and so will be opposed by many groups. Whether the human genome project is a great leap in technology or playing God the argument of whether it should be used is still undecided. (Word Count - 468) Joseph Frend - 1 - ...read more.