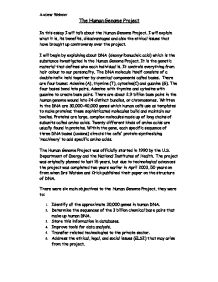 The Human Genome Project In this essay I will talk about the Human Genome Project. I will explain what it is, its benefits, disadvantages and also the ethical issues that have brought up controversy over the project. I will begin by explaining about DNA (deoxyribonucleic acid) which is the substance investigated in the Human Genome Project. It is the genetic material that defines who each individual is. It controls everything from hair colour to our personality. The DNA molecule itself consists of a double-helix held together by chemical components called bases. There are four bases; Adenine (A), thymine (T), cytosine(C) and guanine (G). The four bases bond into pairs, Adenine with thymine and cytosine with guanine to create base pairs. There are about 2.9 billion base pairs in the human genome wound into 24 distinct bundles, or chromosomes. ...read more.

Identify all the approximate 30,000 genes in human DNA. 2. Determine the sequences of the 3 billion chemical base pairs that make up human DNA. 3. Store this information in databases. 4. Improve tools for data analysis. 5. Transfer related technologies to the private sector. 6. Address the ethical, legal, and social issues (ELSI) that may arise from the project. Scientists in over 1000 laboratories around the world have contributed to the Human Genome Project. The largest contribution from a single institution being that of The Sanger Institute, the only British contributor, completed almost a third of the sequence. The major benefit to come from the human genome project is to have an understanding about how genetic diseases occur, how they can be treated and better yet, how they can be prevented. ...read more.

This is a tremendous accomplishment however some people feel that it is against nature and therefore wrong. The idea of designer babies takes this even further so that the parents can choose their offspring's personality, talents, height, hair colour and much more to create a 'super baby'. These ideas are extremely controversial especially as they can be linked with the ideas of Adolf Hitler and his plans to create a superior human race, which contributed to the largest war in history. A simple example is found in the following 1991 quotation from U.S. News & World Report: "Society's knotty decisions will become even more tangled as the massive Human Genome Project lumbers toward its goal of mapping the location of every human gene, including those that govern such traits as intelligence, coordination and grace. That knowledge will expand the potential of genetic engineering far beyond the correction of disease and push it toward the realm of social engineering. ...read more.