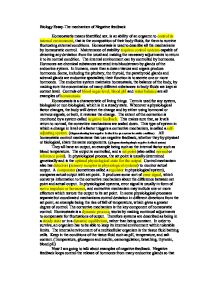 The mechanism of Negative feedback.

Biology Essay-The mechanism of Negative feedback Homeostastis means bhattified s*x. is an ability of an orgasmn to control its internal environment, that is the composition of their body fluids, for them to survive fluctuating external conditions. Homeostasis is used to describe all the mechanisms by homeostatic control. Maintenance of stability requires control systems capable of detecting any deviation from the usual and making the necessary adjustments to return it to its normal condition. The internal environment can by controlled by hormones. Hormones are chemical substances secreted into bloodstream by glands of the endocrine system. In humans, more than a dozen tissues and organs produce hormones. Some, including the pituitary, the thyroid, the parathyroid glands and adrenal glands are endocrine specialists; their function is to secrete one or more hormones. The endocrine system maintains homeostasis, the balance of the body, by making sure the concentration of many different substances in body fluids are kept at correct level. Controls of blood sugar level, blood pH and water balance are all examples of homeostasis. Homeostasis is a characteristic of living things. Term is used for any system, biological or non-biological, which is in a steady state. Whenever a physiological factor changes, the body will detect the change and by either using hormonal or nervous signals, or both, it reverses the change. ...read more.

Hypothalamus in brain detects even small decrease in metabolic rate and response by releasing more thyrotropin releasing hormone. This acts on the pituitary gland, causing it to release more thyroid-stimulating hormone. This passes to thyroid gland, which responds by secreting thyroxine, the hormones which acts on individual cells to increase metabolic rate. When metabolic rate gets back to normal levels, the hypothalamus responds by releasing less thyrotropin releasing hormone and in a healthy person, homeostasis is maintained. (Diagram showing control of metabolic rate involving a negative feedback loop) The control of blood glucose is an example of homeostasis. A negative feedback mechanism operates to detects and correct the level of blood glucose, maintaining it within 'safe' limits. The pancreas plays an important role in the control of blood glucose level. If the levels are too high, beta cells in the islets of Langerhans respond by releasing insulin. This travels to all parts of the body at the blood, but mainly affects cells in muscles, liver and adipose tissue. Insulin lowers the blood sugar level by making the cell membrane more permeable to glucose. It activates transport proteins, allowing glucose to pass into cells. If the levels of blood glucose get too low, alpha-cells in the islets of Langerhans secrete glucagons. This hormone fits into receptor sites on cell membranes, and activates the enzymes inside the cell, which convert glycogen into glucose. ...read more.

The hypothalamus monitors the temperature of blood temperature of blood passing through it and in addition receives nervous information from receptors in the skin about external temperature changes. Any reduction in blood temperature will bring about changes, which conserve heat. A rise in blood temperature has the opposite effect. (Diagram) Nearly all structures of the skin play some part in temperature regulation. (diagram) The skin is divided into two main layers, the epidermis at the surface, and the dermis beneath. Below the dermis is another layer, not strictly part of the skin, called the hypodermis. In cold conditions heat energy is liable to be lost from the body, but this is counteracted by the following responses: * The hairs are raised into a more vertical position by contraction of erector pili muscles. The contraction of erector pili also leads goose pimples. (diagram) * The arteriole leading to the superficial capillaries constrict. As a result blood flow to the surface of the skin is reduced, thereby cutting down the loss of heat energy from the blood to the surroundings. This vasoconstriction is brought about by the sympathetic nervous system and is particularly powerful in exposed structures such as ears, which are particularly susceptible to cold. Blood largely passes beneath the insulating layer of subcutaneous fat and so loses little heat to the outside. (diagram) * Shivering-At low temperatures, the skeleton muscle of the body may undergo rhythmic, involuntary contractions, which produce metabolic heat. Asynchronous twitching of groups of muscle may precede this shivering. ...read more.