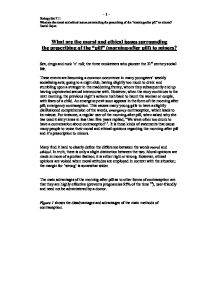 The Morning After Pill

What are the moral and ethical issues surrounding the prescribing of the "pill" (morning-after pill) to minors? Sex, drugs and rock 'n' roll; the three musketeers who pioneer the 21st century social life. These events are becoming a common occurrence in many youngsters' weekly socialising acts; going to a night club, having slightly too much to drink and stumbling upon a stranger in the maddening frenzy, whom they subsequently end up having unprotected sexual intercourse with. However, when the story continues to the next morning, the previous night's actions rush back to haunt the woman or couple, with fears of a child. An emergency exit soon appears in the form of the morning after pill; emergency contraception. This causes many young girls to have a slightly disillusioned comprehension of the words, emergency contraception, which leads to its misuse. For instance, a regular user of the morning-after pill, when asked why she has used it sixty times in less than five years replied, "We were often too drunk to have a conversation about contraception" 1. It is these kinds of statements that cause many people to voice their moral and ethical opinions regarding the morning-after pill and it's prescription to minors. Many find it hard to clearly define the difference between the words moral and ethical. In truth, there is only a slight distinction between the two. ...read more.

Instead, it occurs a few days after the egg(s) has/have been discharged from the ovary. This process is called ovulation. During the time between intercourse and conception itself, the sperm continue to travel through the fallopian tube until the egg appears. Therefore, taking emergency contraception, the 'morning after' intercourse will prevent a pregnancy. 3, 5, 8 .The meaning of the words morning-after should not be taken literally as it is effective within seventy two hours of unprotected sexual intercourse. 11 The pharmacology of the morning-after pill is a combination of hormones. The types of hormones and the proportion in which they are used vary in different morning-after pills. Some morning-after pills contain only one hormone called progestin (Plan B) and some contain small doses of two hormones, progestin and estrogen (mifepristone).4 Progestin prevents the sperm from reaching the egg and also prohibits a fertilised egg from attaching to the endometrial lining of the uterus (implantation). 3 The moral and ethical controversies surrounding the morning-after pill stem from the fact that GPs can now prescribe it to girls who are classed as minors; younger than sixteen years of age. Those opposed to this bold endeavour, propose that prescription to minors will only serve to fuel an already risky attitude of having unprotected sex first and asking questions later. Many also argue that rampant ill health will become a force to contend with, as exposure to the risk of infections such as Chlamydia, Gonorrhoea, HIV-AIDS and other sexually transmitted diseases7 will only increase with frequent unprotected sex. ...read more.

However, morning-after pills, which prevent pregnancies, are entirely different from the abortion pill, which aborts a zygote. 3 Taking into account the cumalative effect of, the confidentiality issues, the risk of catching STDs and of course the statistics, it is obvious that the controversies surrounding the morning-after pill cannot be justified in one statement that says "It is morally right/wrong that to sell the morning-after pill to minors". Each user differs in their situation and where it may seem irresponsible and reckless for one girl it may be the only responsible decision for another. For example, someone who uses the morning-after pill after a reckless night fueled by alcohol and promiscuity could be deemed as careless. However, in a situation where a young girl has been raped and instead of having abortion, takes the morning-after pill, reason suggests that it is not an issue where the girl should be condoned. To say that there is a defined right and wrong concerning the moral and ethical issues surrounding the 'morning after pill', would be unjustified. The heart of the matter is deeper than government legislation or parent confidentiality; it lies in the concernment of a girl. In order to find a plausible solution, biology, age, culture and social well being of the situation must be considered. Moral and ethical perfection is an insignificant subjective. Striving to choose and get the best option for any girl, whether it is to take the morning after pill or not, must remain the objective. ...read more.