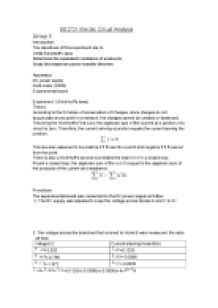 The objectives of this experiment are to Verify Kirchhoffs laws Determine the equivalent resistance of a network &amp; Study the maximum power transfer theorem.

The objectives of this experiment are to

Determine the equivalent resistance of a network

According to the Principle of conservation of Charges, since charges do not accumulate at any point in a network, the charges cannot be created or destroyed.

There is also a Kirchhoff’s second law relates the total e.m.f in a closed loop.

Round a closed loop, the algebraic sum of the e.m.

The power supply was removed, we measured again the equivalent resistance

The result in step 1 is smaller than in step 2.In step 1 , the power supply has not been removed, and it consists internal resistance. As it connects parallel to

the circuit, the equivalent resistance will be smaller than without parallel internal resistance.

The star-to delta or the delta –to –star transformation was used to calculate the equivalent resistance of network shown in figure 3.

we calculate is close to step 1 but smaller than step 2. When we calculate the equivalent resistance of

The circuit as shown in figure 7 with

aII) there is not significant risk of this type of accident to occur, as the voltage of personal computer is 17v, it is smaller than the minimum source voltage that can produce electrical shock.

b) The criterion for maximum power transfer from a source to a load is the load resistance equals to the internal resistance of the source. If we are free to select

without changing the source voltage, we can decrease the

in order to maximize the power delivered to the load.

, the higher the power supply

The maximum power output occurs when