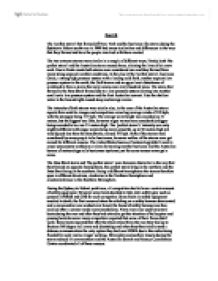 The 'perfect storm' that formed off New York and the hurricane-like storm during the Sydney to Hobart yacht race in 1998 had many similarities and differences in the way that they formed and how the people involved with them reacted.

Part B The 'perfect storm' that formed off New York and the hurricane-like storm during the Sydney to Hobart yacht race in 1998 had many similarities and differences in the way that they formed and how the people involved with them reacted. The two extreme storms were similar in a couple of different ways. Firstly, both 'the perfect storm' and the Australian storm caused chaos, claiming the lives of six crew each. Due to freak events both storms were considered rare and they formed from many strong separate weather conditions. In the case of the 'perfect storm', hurricane Grace, a strong high pressure system with a leading cold front, another separate low pressure system to the north, the Gulf stream and an upper level disturbance all combined to form a storm that only occurs once every hundred years. The storm that formed in the Bass Strait formed due to a low pressure system moving into another small scale low pressure system and the East Australian current. ...read more.

Being in different hemispheres the storms therefore spun in different directions, clockwise in the Northern Hemisphere and counterclockwise in the Southern Hemisphere. During the Sydney to Hobart yacht race, all competitors had to have a certain amount of safety equipment. However some boats decided to take extra safety gear such as personal EPIRBS and GPS for each competitor. Some faults in safety equipment resulted in death, the first occurred when the stitching on a safety harness deteriorated and a crewmember was washed over board, the brand of safety harness was then recalled after a coroner made recommendations. Flares were also used by several boats during the race and after they had retired to get the attention of helicopters and passing boats however many competitors reported that some of their flares didn't work. Some boats reported that after they had retired from the race they had up to fourteen 360 degree roll overs and dismasting and when they then tried to send a distress communication the only option they had was EPIRB due to the radios being flooded by water and no longer working. ...read more.

Also other hazards the skippers had to face were 150 to 180 kph winds, heavy rain, crossing seas and human factors such as sea sickness and fatigue. The skipper of the Andrea Gail would have had to oversteer to stay on coarse during the storm because of the wind and high wave action. If he decided to turn around a high-risk manoeuvre called rounding up would have to be performed. Rounding up is turning around in a trough of a wave, if done wrong or too slow the boat broaches and capsizes. The majority of the skippers in the Sydney to Hobart yacht race blamed the bureau of meteorology for not providing accurate forecasts as the reason for why they didn't turn around before they hit the storm. The skippers on all of the boats in both the storms had many years experience on boats and it wasn't due to their skill level that they came into trouble it was due to other human elements such as safety regulations that could have saved the crews. ...read more.