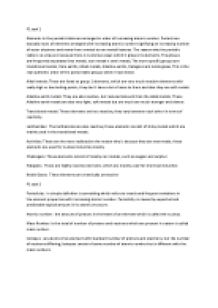 ﻿P1 task 1 Elements in the periodic table are arranged in order of increasing atomic number. Periods are basically rows of elements arranged with increasing atomic number signifying an increasing number of outer electrons and move from a metal to non metal features. The reason why the periodic table is so unique is because there is numerous ways which it groups its elements, The groups are frequently separated into metals, non metals n semi metals, The more specific groups are transitional metals, Rare earths, Alkali metals, Alkaline earths, Halogens and noble gases, This is the real authentic order of the period table groups which I have listed. Alkali metals: These are listed as group 1 elements, which are very much reactive elements with really high or low boiling points, they don?t have a lot of mass to them and also they are soft metals. Alkaline earth metals: They are also reactive, but reduced amount than the alkali metals. These Alkaline earth metals are also very light, soft metals but are much are much stronger and denser. Transitional metals: These elements are less reactive; they vary between each other in terms of reactivity. Lanthanides: The lanthanides are also reactive; these elements consist of shiny metals which are mainly used in the transitional metals. ...read more.

has in its most outer shell I can look over to the group number and it would tell me like now Lithium has 1 electron in its most outer shell and is from group 1,there is no reason why this happens it just is like that which makes it very easier. Here are some more examples to get the gist of how it works: 1. Nitrogen- belongs to group 5, contains 7 protons,7 neutrons and 7 electrons, so the electronic structure will be 2,5. This again relates group 5 and 5 number of electrons in outer shell 2. Fluorine- belongs to group 7, contains 10 neutrons, 9 protons and 9 electrons so the electronic structure would be 2,7. Same as before group number 7 and 7 electrons in outer shell. P1 task 4 4 groups and its main properties 1. Transitional metals- These are placed in the centre of the periodic table, most likely to be dense and hard, Transitional metals are reactive but not as much as alkali metals, There are many transitional metals out there but there are a few main ones which are iron, copper, silver and gold these are important metals. List of chemical properties of transitional metals: 1. ...read more.

So see how sodium has got an electron structure of 2,8,1 and the chlorine has got a electronic structure of 2,8,7. So now I know that chlorine needs 1 electron to make its outer shell a full shell, The sodium loses an electron and the chlorine gains the electronic leaving the sodium ion with a positive charge and the chlorine ion negatively charged. 2. Ionic bonding between magnesium oxide, See how the magnesium has an electronic structure of 2,8,2 and oxygen has an electronic structure of 2,6. I know from this magnesium will lose 2 electrons making it postivly charged and the oxygen will gain 2 electrons making it negativly charged M1 task 3 Ammonia nh3- each nitrogen is bonded to 3 hydrogen?s with 3 lone pairs and they?re fore has the shape trigonal pyramidal with a bond angle of 107.5 degrees. H20 each oxygen is bonded to two hydrogen?s giving a h2o molecule the shape of non-linear with two lone pairs and a bond angle of 105 degrees hence they do not have the same bond angle as methane (ch4) because each carbon is bonded to 4 hydrogen?s and has a bond angle of 109.5 degree so they do not have the same bond angles given that each molecule varies due to electron repulsion. ...read more.