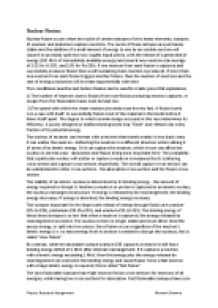 The Physics of an Atomic b**b

Nuclear fission occurs when the nuclei of certain isotopes of very heavy elements, isotopes of uranium and plutonium capture neutrons. The nuclei of these isotopes are just barely stable and the addition of a small amount of energy to one by an outside neutron will cause it to promptly split into two roughly equal pieces, with the release of a great deal of energy (180 MeV of immediately available energy) and several new neutrons (an average of 2.52 for U-235, and 2.95 for Pu-239). If one neutron from each fission is captured and successfully produces fission then a self-sustaining chain reaction is produced. If more than one neutron from each fission triggers another fission, then the number of neutrons and the rate of energy production will increase exponentially with time.

Two conditions must be met before fission can be used to create powerful explosions:

1) The number of neutrons lost to fission (from non-fission producing neutron captures, or escape from the fissionable mass) must be kept low.

2) The speed with which the chain reaction proceeds must be very fast. A fission bomb is in a race with itself: to successfully fission most of the material in the bomb before it blows itself apart. The degree to which a bomb design succeeds in this race determines its efficiency. A poorly designed or malfunctioning bomb may "fizzle" and release only a tiny fraction of its potential energy.

The nucleus of an atom can interact with a neutron that travels nearby in two basic ways. It can scatter the neutron - deflecting the neutron in a different direction while robbing it of some of its kinetic energy.

Bringing the fissionable material into a supercritical mass while keeping it free of neutrons;

Introducing neutrons into the critical mass when it is at the optimum configuration (i.e. at maximum super criticality); Keeping the mass together until a substantial portion of the material has fissioned.

To explode, the bomb must first be imploded: compress a subcritical spherical fissionable mass (a ball of normal density uranium and other metals) with specially designed explosives. Implosion is the detonation of explosives on the outer surface, instead of the inner surface, which causes the detonation/shock wave to move inward. Once the shock wave is transmitted to the fissionable core it compresses the core and raises the density to the point of supercriticality which then leads to a great explosion. Essentially what is happening here is that the fissionable mass is crushed to a great density, and once the mass has reached that supercritical density it goes off.

There are four main problems that must be taken care of for an atomic bomb to explode. They are all related with creating a fission chain reaction:

The fissionable material must be kept in a subcritical state before detonation. The fissionable material must be brought into a supercritical state while keeping it free of neutrons. Otherwise most of the fissionable mass would be used up and it would not generate a large explosion (if any). The neutrons must be added to the critical mass when it is at maximum supercriticality, meaning at the most "explosive" point. This can be compared to releasing a rubber-band when it is fully stretched so it will travel with the most speed.

The fissionable mass must be kept together until a large amount of it has gone through fission, making it efficient.

Fusion reactions, also called thermonuclear reactions, are reactions between the nuclei of certain isotopes of light elements. If the nuclei collide with sufficient energy provided by heat in a bomb, or by a particle accelerator in the laboratory then there is a significant chance that they will merge to form one or more new nuclei with the release of energy. Different nuclei combinations have different inherent likelihoods of reacting in a collision at a particular temperature. The rates of all fusion reactions are affected by both temperature and density. The hotter and denser the fusion fuel, the faster the fusion burns. The fusion reactions used in bombs and power plant designs are simple, and extremely fast - which is essential since the fuel must be fully consumed within microseconds.

The splitting of atomic nuclei releases enormous energy. When a single free neutron strikes the nucleus of an atom of fissile (radioactive) material like uranium 235 or plutonium 239, it usually knocks two or three more neutrons free. Energy is released when those neutrons split off from the nucleus, and the newly released neutrons strike other uranium 235 (or plutonium 239) nuclei, splitting them in the same way, releasing more energy and more neutrons. This chain reaction spreads almost instantaneously. The atomic bomb (A-bomb) was a weapon of destruction that used the power released by the splitting of atomic nuclei.
When a critical mass is available, a chain reaction takes place instantaneously, releasing energy far beyond the capacity of ordinary explosives.