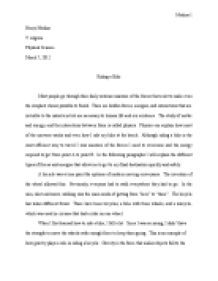 The physics of riding a bicycle entails many different properties.

Most people go through their daily routines unaware of the forces that exist to make even the simplest chores possible to finish.  There are hidden forces, energies, and interactions that are invisible to the naked eye but are necessary to human life and our existence.  The study of matter and energy, and the interactions between them is called physics.  Physics can explain how most of the universe works and even how I ride my bike at the beach.  Although riding a bike is the most efficient way to travel I was unaware of the forces I need to overcome and the energy required to get from point A to point B.  In the following paragraphs I will explain the different types of forces and energies that allow me to get to my final destination quickly and safely.

A bicycle was at one point the epitome of modern moving conveyance.  The invention of the wheel allowed this.  Previously, everyone had to walk everywhere they had to go.

Without friction we would just be sliding all over place. A bike has a brake system which when engaged causes friction, allowing me to stop.  The faster I go, the more friction is needed in order for my bicycle to come to a complete stop. According to Newton’s first law of motion, “objects in motion tend to stay in motion, unless acted on by an outside force” (qtd. by Martin).  If there was no friction, then I would continue riding until I hit a wall, a car, a person, a park bench, a body of water, etc.  During the braking process, the friction caused produces heat that could in effect, puncture the tire.  All bicycle riders should use caution when increasing speed as this could lead to dangerous consequences.

Similar to a car that has an engine which powers it to move, so does a bicycle.  That engine is me, or more simply, the power of man.  In order to make your bike move, force is necessary.

The physics of riding a bicycle entails many different properties.  Moving the bicycle works as an anti-gravity property.  The faster you go, better you can balance yourself on the bike.  In order to go fast, you must produce the energy to get to where you want to go.  The human body produces this energy in the form of force using the muscles in your legs.  Riding a bicycle has many advantages including health benefits, preserving the environment and saving money on gas.