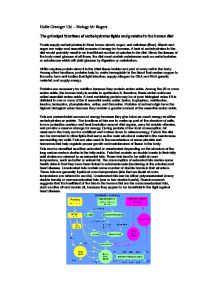 Hollie Grainger 13d - Biology Mr Rogers The principal functions of carbohydrates lipids and proteins in the human diet Foods supply carbohydrates in three forms: starch, sugar, and cellulose (fiber). Starch and sugar are major and essential sources of energy for humans. A lack of carbohydrates in the diet would probably result in an insufficient number of calories in the diet. Since the tissues of the body need glucose at all times, the diet must contain substances such as carbohydrates or substances which will yield glucose by digestion or metabolism. All life requires protein since it is the chief tissue builder and part of every cell in the body. Among other functions, proteins help to: make hemoglobin in the blood that carries oxygen to the cells; form anti-bodies that fight infection; supply nitrogen for DNA and RNA genetic material; and supply energy. Proteins are necessary for nutrition because they contain amino acids. Among the 20 or more amino acids, the human body is unable to synthesize 8, therefore, these amino acids are called essential amino acids. A food containing protein may be of poor biological value if it is deficient in one or more of the 8 essential amino acids: lysine, tryptophan, methionine, leucine, isoleucine, phenylalanine, valine, and threonine. Proteins of animal origin have the highest biological value because they contain a greater amount of the essential amino acids. ...read more.

This mucus creates a barrier and prevents autodigestion (digestion of an organisms own tissue by its own enzymes).In the wall of the stomach are pits (gastric glands) created by infoldings of the epithelium. Some cells lining the pits are called chief cells. These release an inactive enzyme called pepsinogen. Other cells called parietal cells (or oxyntic cells) release HCl (hydrochloric acid). The acid has several beneficial effects: * It creates the right pH for the enzymes to work efficiently. * It kills bacteria that have escaped the lysozyme in the mouth. * It removes a portion of the pepsinogen protein so that it becomes active pepsin. It is important to have the pepsin enzyme since it begins the digestion of proteins into shorter polypeptides. The pepsinogen and acid together are called the gastric juice. They are released because the presence of food in the mouth, the smell of the food etc. triggers off impulses to the brain which then send impulses to the gastric glands in the stomach to release these substances.The physical stretching of the stomach when food is in it stimulates the glands themselves to secrete a hormone gastrin. The hormone is released into the blood and its target cells are those of the gastric glands so this too causes the release of the gastric juice. Gastrin also stimulates the pyloric sphincter (between the stomach and first part of the small intestine) to relax. ...read more.

the production and release of pancreatic juice (containing enzymes). Enzyme: Released by duodenum: Released by pancreas: Action: Aminopeptidase Yes Peptides to amino acids Enterokinase Yes Inactive trypsinogen into trypsin Maltase Yes Maltose to glucose Sucrase Yes Sucrose to glucose and fructose Exopeptidase Yes Peptides into amino acids Lactase Yes Lactose into glucose and galactose Amylase Yes Yes Starch / glycogen into maltose Chymotrypsin Yes Proteins into amino acids Trypsin Yes Proteins into amino acids Chymotrypsinogen into chymotrypsin Lipase Yes Lipid into fatty acids and glycerol Carboxypeptidase Yes Peptides to amino acids Endopeptidase Yes Proteins into peptides Briefly describe absorption of products of digestion Large molecules have now been chemically digested into their constituent subunits by enzymes. They now need to be absorbed through the intestine wall, along with mucus and the digestive juices. Absorption takes place by simple diffusion, facilitated diffusion and active transport. Monosaccharides, amino acids, dipeptides and tripeptides are actively transported into the epithelial cells lining the wall. The fatty acids, glycerol and monoglycerides form complexes with bile salts called micelles. The micelles come into contact with epithelium cells and the fat-soluble fat components diffuse into the epithelium cell, leaving behind the fat insoluble bile salts. In the epithelium, the fatty acids and glycerol are reformed by the endoplasmic reticulum to make triglycerides. They are packaged into globules with cholesterol and phospholipids and then coated with protein to be passed out from the epithelial cell into the lacteal. Eventually these packages, called chylomicrons, are emptied into the blood. ...read more.