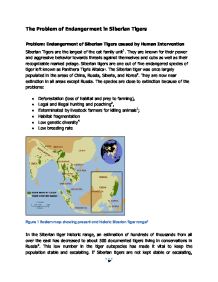 The Problem of Endangerment in Siberian Tigers

The Problem of Endangerment in Siberian Tigers Problem: Endangerment of Siberian Tigers caused by Human Intervention Siberian Tigers are the largest of the cat family unit1. They are known for their power and aggressive behavior towards threats against themselves and cubs as well as their recognizable marked pelage. Siberian tigers are one out of five endangered species of tiger left known as Panthera Tigris Altaica1. The Siberian tiger was once largely populated in the areas of China, Russia, Siberia, and Korea2. They are now near extinction in all areas except Russia. The species are close to extinction because of the problems: * Deforestation (loss of habitat and prey to farming), * Legal and illegal hunting and poaching2, * Exterminated by livestock farmers for killing animals1; * Habitat fragmentation * Low genetic diversity4 * Low breeding rate Figure 1 Eastern map showing present and historic Siberian Tiger range2 In the Siberian tiger historic range, an estimation of hundreds of thousands from all over the east has decreased to about 500 documented tigers living in conservations in Russia2. This low number in the tiger subspecies has made it vital to keep the population stable and escalating. If Siberian tigers are not kept stable or escalating, extinction will be a probable outcome for this subspecies, making it the fourth to become extinct in the Tigris species. Legal and illegal hunting and poaching of Siberian tigers has been a major cause to the endangerment of this subspecies of tiger. ...read more.

Throughout the 60 to 100km2 in the tiger's territory, they may have cubs or a mate in which they will be separated from, and unable to take care of their offspring. This may prevent more Siberian tigers from surviving which is unethical. Cubs need a parent to hunt prey, and bring back to their offspring and breaking down the meat to be able to consume. Without this help, cubs will be unable to survive on their own and help from other parent tigers will not be available. Even at a young age, Siberian tiger cubs are seen as a threat to other Siberian tigers and will not be able to obtain help. A cub is naturally taken care of by their parent up to three years1. If Siberian tiger parents are taken away from their cubs, this will prevent offspring from surviving which is unethical. Economic Implication To keep Siberian Tigers in zoos to obtain their health, the cost is a key problem: * Cost of maintenance (grooming, food, vitamins ECT.)2 & 7 * Health care (medicine if needed for treatment) * Transportation of Siberian tigers out of wild4 * Research (tests and upkeep of examinations) The cost of maintaining Siberian tigers in this environment is high. Health care for each tiger is costly because of the vitamins and minerals consumed daily.9 Many Siberian tigers are maintained by volunteer researchers. This is because zoos do not have enough expenses to keep a full staff on payroll from providing transportation and maintenance fees7. ...read more.

***
This work contains good information but there is too much repetition and some contradictions. More discussion of some of the key points would have been useful.