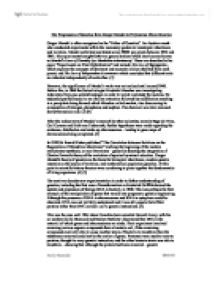 The Progression of Genetics from Gregor Mendel to Polymerase Chain Reaction

The Progression of Genetics from Gregor Mendel to Polymerase Chain Reaction Gregor Mendel is often recognised as the "Father of Genetics". An Austrian monk who conducted experiments within the monastery garden to investigate inheritance and variation, Mendel cultivated and tested some 29000 pea plants between 1856 and 1863. His experiments brought forth two generalisations which later became known as Mendel's Laws of Heredity (or Mendelian inheritance). These are described in his paper "Experiments on Plant Hybridisation" and include The Law of Segregation, which explains the concepts of dominant and recessive alleles inherited from each parent, and The Law of Independent Assortment which concluded that different traits are inherited independently of each other. (1) However, the significance of Mendel's work was not realised until around 1900. Before this, in 1869 the Swiss biologist Friedrich Miescher was investigating leukocytes from pus-soaked bandages in order to isolate and study the nucleus. He subjected purified nuclei to an alkaline extraction followed by acidification resulting in a precipitate being formed which Miescher called nuclein, also discovering its composition of nitrogen, phosphorus and sulphur. ...read more.

Their experiment involved removing various organic compounds from a bacteria cell, if the remaining compounds were still able to cause another strain of bacteria to transform then the substances removed could not be the carrier of genes. Proteases were used to remove proteins, thought to carry genetic instruction, and the other bacteria strain was able to transform - showing that although the protein had been removed - genetic instructions were still present. Therefore, DNA was then removed using a deoxyribonuclease enzyme and it was found the other strain of bacteria did not transform - proving that DNA was the carrier of genes in cells. (6) (7) This work was further proved by Alfred Hershey and 1952 with the Hershey-Chase experiment. Two T2 phages were used, one containing radioactive labelled protein, one containing radioactive labelled DNA, to infect bacteria. The bacteria and phage coat were then separated by blending and centrifugation and the radioactive DNA was found to be transferred to the bacteria, whereas the protein stayed in the phage coat. ...read more.

The workings of DNA were largely understood. (3) This understanding led to the possibility of changing and manipulating DNA, with the discovery of restriction enzymes in bacterium that could be used to "cut and paste" DNA sequences. In 1983 Kary Mullis, an American Biochemist, developed the Polymerase Chain Reaction technique of amplifying small amounts of DNA; although the main principles of PCR were described in 1971 by Kjell Kleppe, a Norwegian scientist. PCR is now used in many genetic techniques requiring the amplification of DNA, including genetic fingerprinting, paternity testing, sequencing, the detection of genetic diseases and the analysis of ancient DNA. Research progressed from the initial aim of understanding to the ways in which knowledge of genetics can be successfully exploited through the second half of the 20th century. This saw the introduction of gene therapy, genetically modified crops, cloning and use of stem cells. (9) Also in the late 20th century the task became to sequence particular genes (for example the gene in which defects cause Cystic Fibrosis) and map the genomes of increasingly complex organisms. The Human Genome Project was completed in 2003. ...read more.