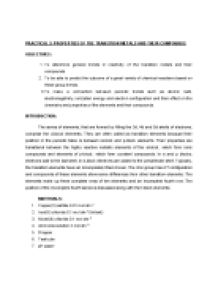 The properties of transition metals

﻿PRACTICAL 2: PROPERTIES OF THE TRANSITION METALS AND THEIR COMPOUNDS OBJECTIVES: 1. To determine general trends in reactivity of the transition metals and their compounds 2. To be able to predict the outcome of a great variety of chemical reactions based on these group trends. 3. To make a connection between periodic trends such as atomic radii, electronegativity, ionization energy and electron configuration and their effect on the chemistry and properties of the elements and their compounds. INTRODUCTION: The series of elements, that are formed by filling the 3d, 4d and 5d shells of electrons, comprise the d-block elements. They are often called as transition elements because their position in the periodic table is between s-block and p-block elements. Their properties are transitional between the highly reactive metallic elements of the s-block, which form ionic compounds and elements of p-block, which form covalent compounds. In s and p blocks, electrons add to the last shell, in d-block electrons are added to the penultimate shell. Typically, the transition elements have an incompletely filled d level. The zinc group has d10 configuration and compounds of these elements show some differences from other transition elements. The elements make up three complete rows of ten elements and an incomplete fourth row. The position of the incomplete fourth series is discussed along with the f-block elements. ...read more.

The d electrons are loosely bound, which contributes to the high electrical conductivity and malleability of the transition elements. The transition elements have low ionization energies. They exhibit a wide range of oxidation states or positively charged forms. The positive oxidation states allow transition elements to form many different ionic and partially ionic compounds. The formation of complexes causes the d orbital to split into two energy sublevels, which enables many of the complexes to absorb specific frequencies of light. Thus, the complexes form characteristic colored solutions and compounds. Complexation reactions sometimes enhance the relatively low solubility of some compounds. Common properties of transition metals:- Hardness, Density, Melting and Boiling Point 1. Transition metals have smaller atomic volumes than Group I and II metals because additional electrons are being progressively added to the inner atomic orbitals resulting in stronger attraction to the nucleus. 2. These atoms of smaller volume can pack together more closely resulting in higher densities and hardness. 3. Closer packing results in stronger bonding so more energy is required to melt or boil transition metals. Ionisation Energy and Chemical Reactivity 1. The smaller atomic radii of transition metals means the valence shell (outer-shell) electrons are more strongly attracted to the nucleus and therefore less easily removed resulting in higher first ionisation energies compared to Group I and II metals. ...read more.

5. Ferromagnetic compounds such as CrO2 and Fe3O4 also exist. CONCLUSION: The 38 elements in groups 3 through 12 of the periodic table are called "transition metals". As with all metals, the transition elements are both ductile and malleable, and conduct electricity and heat. The interesting thing about transition metals is that their valence electrons, or the electrons they use to combine with other elements, are present in more than one shell. This is the reason why they often exhibit several common oxidation states. There are three noteworthy elements in the transition metals family. These elements are iron, cobalt, and nickel, and they are the only elements known to produce a magnetic field. Transition metal generally shows: 1. higher densities 2. higher melting and boiling points 3. higher ionization energies 4. a range of oxidation states 5. colors in their compounds 6. the ability to form a wide range of coordination compounds 7. paramagnetism (ability to attract a magnetic field) 8. less chemical reactivity than Group I (Alkali) metals and Group II (Alkali Earth) metals POST LAB QUESTIONS: 1. Describe the physical properties of transition metals. Physical properties of transition metals are hard, dense and shiny. They are good conductors of heat and electricity. They are also malleable and ductile. 1. How do transition metals react with water? Transition metals react with water very slowly, if at all. 1. What properties do the compounds of transition metals have in common? The common properties, they form colored compounds. They form compounds that can have more than one formula. ...read more.