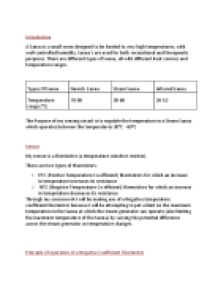 A Sauna is a small room designed to be heated to very high temperatures, with well-controlled humidity. Sauna’s are used for both recreational and therapeutic purposes. There are different types of Sauna, all with different heat sources and temperature ranges.

My sensor is a thermistor (a temperature sensitive resistor).

There are two types of thermistors.

Principle of operation of a Negative Coefficient Thermistor

Negative Temperature Coefficient thermistors are usually made from semiconductors (beads of metal oxides). 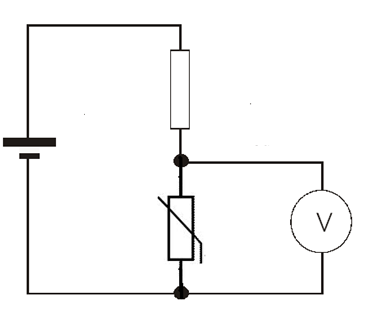 My objective at this point was to collect as accurate readings as possible for the potential difference across the thermistor in circuit at specific temperatures between 30°C and 60°C.

First problem I faced was collecting accurate temperature readings with the thermometer. I had to try to avoid parallax error and systematic error so I do not end up linking a voltage out (potential difference across thermistor) with a wrong temperature.

Improvement: I decided to use a data logger to replace the thermometer because it is more sensitive and also helps me avoid the problem of parallax error when taking readings.

Improvement :  I put an insulator round the beaker, and increased the volume of water I was using for each temperature reading as an attempt to reduce the rate of heat loss, thereby reducing the rate at which temperature drops and enable me take more accurate readings of the voltage out at high and low temperatures

Improvement: I decided to stir the water in an attempt to keep the water body at a uniform temperature. I also decided to cello tape a data logger to the right and to the left of the thermistor only taking voltage readings when they are both on the specified temperature.

The new readings are more consistent than the previous ones

I could now take all my readings of voltage out (potential difference across the thermistor) for every 2°C from 30°C to 60°C.

This I did and repeated 9 times and found the average

The readings were taken over three consecutive days using the same equipment throughout the experiment.

Safety Precautions in Carrying Out Experiment

Sensitivity :  This is the ratio of change in output to change in input