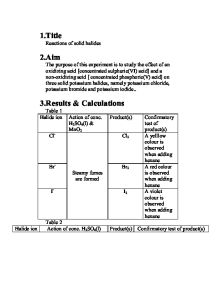 + 4H2O (l) Table 3: 3KCl(s) + H3PO4 (l)--> K3PO4(s) + 3HCl (g) 3KBr(s) + H3PO4 (l)--> K3PO4(s) + 3HBr (g) 3KI(s) + H3PO4 (l)--> K3PO4(s) + 3HI (g) 5.2 What is the relationship between H-X bond enthalpy and its tendency to undergo further oxidation? [X=Cl/Br/I] Electron affinity of halogens is the enthalpy change when one mole of electrons is added to one mole of halogen atoms or ions in the gaseous state. The electron affinity decreases from chlorine to iodine. The general decrease in electron affinity is due to the increases in atomic size and number of electrons shells down the group this leads to a decrease in effective charge. Therefore, the tendency of the nuclei of halogen atoms to attract additional electrons decreases. 5.3 State the function of manganese (IV) oxide added in experimental procedure (A). Manganese (IV) oxide is a strong oxidizing agent. When manganese (IV) oxide reacts with reducing agents, it is often reduced to manganese (II) ions 6. Conclusion The reducing ability of the halide ions increases as we go down the Group when react with an oxidizing acid. ...read more.