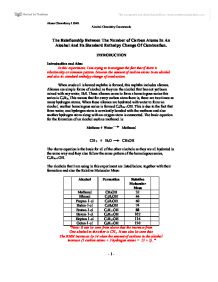 The Relationship Between The Number of Carbon Atoms In An Alcohol And Its Standard Enthalpy Change Of Combustion.

The Relationship Between The Number of Carbon Atoms In An Alcohol And Its Standard Enthalpy Change Of Combustion. INTRODUCTION Introduction and Aim: In this experiment, I am trying to investigate the fact that if there is relationship or common pattern between the amount of carbon atoms in an alcohol and also its standard enthalpy change of combustion. When crude oil is heated naphtha is formed, this naphtha includes alkenes. Alkenes are simple forms of alcohol as they are the alcohol that has not yet been mixed with any water, H20. These alkenes come to form a homologous series this series is CnH2n. This means that for every carbon atom there is, there are two times as many hydrogen atoms. When these alkenes are hydrated with water to form an alcohol, another homologous series is formed CnH2n+1OH. This is due to the fact that from water, one hydrogen atom is covalently bonded with the methane and also another hydrogen atom along with an oxygen atom is connected. The basic equation for the formation of an alcohol such as methanol is: Methene + Water Methanol CH2 + H2O CH3OH The above equation is the basis for all of the other alcohols as they are all hydrated in the same way and they also follow the same pattern of the homologous series, CnH2n+1OH. The alcohols that I am using in this experiment are listed below, together with their formation and also the Relative Molecular Mass: Alcohol Formation Relative Molecular Mass Methanol CH3OH 32 Ethanol C2H5OH 46 Propan-1-ol C3H7OH 60 Butan-1-ol C4H9OH 74 Pentan-1-ol C5H11OH 88 Hexan-1-ol C6H13OH 102 Heptan-1-ol C7H15OH 116 Octan-1-ol C8H17OH 130 *Note: It can be seen from above that the increase from One alcohol to the other is CH2. ...read more.

Hypothesis I stated in my prediction above that I think there will be a correlation between the amount of carbon atoms in an alcohol and its enthalpy change of combustion due to the fact that as we travel further down the family of alcohols, like for methanol, the reactant bond energies are greater than the products. I think that this will carry on through the whole of the family of alcohols. Also, due to the fact that carbon burns easily and more intensely, so therefore the more carbon atoms there are the higher the ?H value would be. Furthermore, the product ?H value will be greater each time as there are more bond energies to be formed in the products section. Diagram The diagram below shows the set-up for the equipment in the experiment: Safety In this experiment, safety plays a big role as inhalation or the swallowing of the alcohols can have dreadful side effects. Also, there is the use of fire and also hot water, improper uses of these may lead to burning or scalding. Safety goggles and a laboratory coats must be worn. Method 1. Pick one of the eight alcohols. 2. Weigh the alcohol burner including the lid and record the weight reading. 3. Measure 300ml of water and put it into a tin can. 4. Measure the temperature of the water. 5. Put the alcohol burner in a drought excluder. 6. Take of the lid and light the alcohol burner wick. 7. Balance the water tin can on the drought excluder. 8. Wait until the temperature of the water has risen by 15� to 18�. 9. Take off the water can from the drought excluder and replace lid quickly. ...read more.

This brings the section onto limitations and problems. There were very many limitations to this experiment mainly due to the fact that the experiment was not as much of a fair test as it should have been. The first problem is the fact there were different burners for different alcohols. This meant that the same burner could not be used for the experiment for the different alcohols. Furthermore, the burners were all different sizes so therefore the test was unfair. This also meant that different sized drought excluders had to be used having a knock on effect to mean different sized water containers had to be used. This means that even though the same water volume is used, there are different amounts of surface area meaning one can lose heat more quickly than the other. Another problem was the fact that different sized wicks were also evident meaning again an unfair experiment. Within the experiment there were two losses of heat, these were at the points of the period when the burner is alighted and is transferred to under the drought excluder and also at the point where it has been covered by the water that is being heated, there are gaps in the drought excluder. There is also a loss of weight at the point where the lid is being taken off from the burner and the wick is being a flamed. As I have said before, I think that I have successfully completed the coursework for the conditions that I was working under. If I did this experiment under stricter conditions with better equipment, I would be able to produce better and more accurate results. The best improvements for this experiment would be to change the experiment in order to satisfy the faults or limitations that I have expressed above. Ahzaz Chowdhury 11S4b Alcohol Chemistry Coursework - 1 - ...read more.