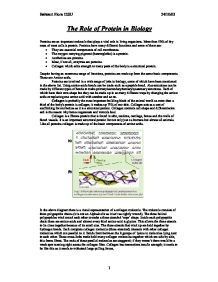 The Role of Protein in Biology.

The Role of Protein in Biology Proteins are an important molecule that plays a vital role in living organisms. More than 50% of dry mass of most cells is protein. Proteins have many different functions and some of them are: * They are essential components of cell membranes. * The oxygen carrying pigment (haemoglobin) is a protein. * Antibodies are proteins. * Most, if not all, enzymes are proteins. * Collagen which adds strength to many parts of the body is a structural protein. Despite having an enormous range of functions, proteins are made up from the same basic components. These are Amino acids. Proteins are involved in a wide range of jobs in biology, some of which have been mentioned in the above list. Using amino acids bonds can be made such as a peptide bond. Also structures can be made by different types of bonds to make primary/secondary/tertiary/quaternary structures. Each of which have their own shape but they can be made up in so many different ways by changing the amino acids or replacing one amino acid with another and so on. Collagen is probably the most important building block of the animal world as more than a third of the body's protein is collagen; it makes up 75% of our skin. ...read more.

It is made up of four polypeptide chains. Two of the four chains make an identical pair and they're called 'Alpha chains'. The other two make another identical pair but are different from the first two pair and are called 'Beta chains'. The haemoglobin molecule is a near spherical shape. The haemoglobin molecule contains two ?-globin chains (pattern A) and two �-globin chains (pattern B). Two of the four haem molecules are visible (pattern C). The four polypeptide chains are packed closely together with their hydrophobic R groups pointing the centre and their hydrophilic ones pointing away from the centre. Each of the two Beta chains has a tertiary structure. The interactions between the hydrophobic R groups in the molecule are important in maintaining its correct 3-dimensional shape. The outward hydrophilic R groups play a part in keeping the solubility of the haemoglobin. It is important in having a polar amino acid on the outside of the molecule in the R group such as glutamine, by having a non-polar amino acid you make the haemoglobin less soluble and this causes unpleasant and hazardous symptoms in anyone whose haemoglobin is full of this 'faulty' type. ...read more.

Hormones such as insulin are proteins. It is a small protein which brings blood sugar levels down from high levels. Disulphide bonds are found in hormones such as insulin. The hormone insulin in made by the pancreas and is released to bring sugar levels down. It turns glucose into glycogen which is a storage sugar in animals. Diabetic people use insulin injections to keep their sugar levels low. Protection against viruses is important and antibodies help in getting rid of viruses. Antibodies are also proteins. Antibodies come from white blood cells and are in the blood stream. Any foreign molecule that is detected is an antigen and what antibodies do is detect these foreign molecules and isolates them. By engulfing them and dissolving the dangerous molecule. The virus or dangerous molecules are memorized by the antibodies so if the same virus or dangerous molecules appear, they can be gotten rid of quickly and efficiently. Proteins are used in so many ways for many different things and there are so many ways of creating a chain of amino acids in numerous orders. This enables protein to do much more than just one thing and can take different 3-dimensional shapes to do the job that it needs to do whether it be a transport protein or an enzyme. ...read more.