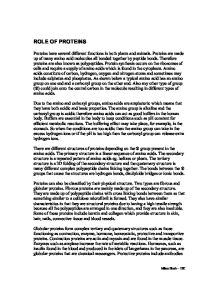 The Role of Proteins

ROLE OF PROTEINS Proteins have several different functions in both plants and animals. Proteins are made up of many amino acid molecules all bonded together by peptide bonds. Therefore proteins are also known as polypeptides. Protein synthesis occurs on the ribosomes of cells and require a supply of amino acids which is found in the cytoplasm. Amino acids constitute of carbon, hydrogen, oxygen and nitrogen atoms and sometimes may include sulphates and phosphates. As shown below a typical amino acid has an amino group on one end and a carboxyl group on the other end. Also any other type of group ((r)) ...read more.

Some of these proteins include keratin and collagen which provide structure in skin, hair, nails, connective tissue and blood vessels. Globular proteins form complex tertiary and quaternary structures such as those functioning as contraction, enzyme, hormone, homeostatic, protective and transportive proteins. Contraction proteins are actin and myosin and are found in the muscle tissue. Enzymes such as amylase increase the rate of metablic reactions. Hormones, such as insulin found in the blood and produced in the islets of langerhams in the pancreas, are globular proteins that are chemical messengers. Protective proteins include antibodies produced by lymphocytes and fibrinogen present in the blood and lastly transportative proteins include haemoglobin in all vertebrates. ?? ?? ?? ?? Milan Shah - 12E ...read more.