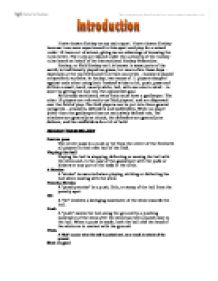 The rules are issued under the authority of the hockey rules board on behalf of the International Hockey Federation.

I have chosen Hockey as my main sport. I have chosen Hockey because I am more experienced in this sport and play for a mixed under 16 team out of school, giving me an advantage of knowing the rules better. The rules are issued under the authority of the hockey rules board on behalf of the International Hockey Federation.

Hockey, or Field Hockey as it is known in some parts of the world, is traditionally played on grass, but more often these days - especially at the top levels and in certain countries - hockey is played on synthetic surfaces. In hockey, two teams of 11 players compete against each other using

The centre pass is a push or hit from the centre of the field with all players in their own half of the field.

Playing the ball is stopping, deflecting or moving the ball with the stick and, in the case of the goalkeeper with the pads or kickers or any part of the body in the circle.

A "stroke" is executed when playing, striking or deflecting the ball when moving with the stick.

A "penalty stroke" is a push, flick, or scoop of the ball from the penalty spot.

A "hit" involves a swinging movement of the stick towards the ball.

Playing distance is the distance within which a player is capable of playing the ball.

Persistent means the first time and all subsequent times after a warning or penalty are given for any particular offence.

Time wasting is any action or lack of action, which prevents play from continuing or commencing within a reasonable time.

Dangerous play is any action, which is dangerous to the player or another player or could lead to a dangerous situation. Such circumstances could include a raised ball, tackling from the "wrong" position, playing the ball when lying on the ground, etc.

Misconduct is rough or dangerous play; any delay which amounts to time-wasting, intentional offences, or any bad behaviour. Captains who fail to undertake their responsibilities satisfactorily should be penalised for misconduct.