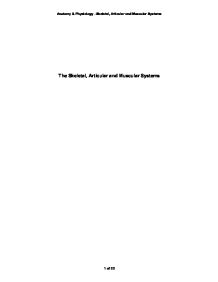 The Skeletal and Muscular System

The Skeletal, Articular and Muscular Systems Task 1 a. Analyse the effects of hormones, diet and activity on bone growth. Bone comprises various types of tissue including bone tissue, cartilage, dense connective tissue, epithelium, adipose tissue and nervous tissue. Bone is continuously growing, remodelling and repairing itself. The process of formation of bone is called as ossification which occurs under the following four conditions: Endochondral Ossification a. Initial formation of bones in an embryo or foetus. In an embryo or foetus there are two types of ossification, intramembranous ossification and endochondral ossification. Intramembranous ossification is the formation of the flat bones of the skull and mandible or lower jawbone. Endochondral ossification involves replacement of cartilage by bone and most bones in the body are formed in this way. b. Growth of bones during infancy, childhood and adolescence until adult bone sizes are reached. Long bones grow in length and bones throughout the body grow in thickness during infancy, childhood and adolescence. c. The remodelling of bones is the replacement of old bone tissue by new bone tissue throughout life of the individual. It involves bone resorption, which is the removal of minerals and collagen fibres from the bone, and bone deposition, which is the addition of minerals and collagen fibres to the bone. d. Repairs of fractures or breaks in bones throughout life. The repair of fractures or breaks sometimes can take months. This is due to the bone slow and gradual deposition of calcium and phosphate needed to strengthen and harden the new bone, and bones cells generally grow and reproduce slowly. There are a number of factors that affect the development, growth and repair of bones. The following three factors will be discussed below: a. Hormones. b. Diet. c. Activity. Hormones secreted by various glands in the body such as the pituitary gland, thyroid gland and parathyroid glands affect the growth and development of bones. For example, the pituitary gland secrets growth hormone, which stimulates division of cartilage cells during ossification. ...read more.

Red bone marrow is present in developing bones of the foetus and in some adult bones such as hip bones, vertebrae, skull, ends of the bones of the arm and thigh, ribs and breastbone. 5. Storage of Phosphorous and Calcium: The bone tissue stores several minerals, mainly calcium and phosphorous that contributes to the strength of the bone. If needed, it releases minerals into the blood to maintain critical mineral balances and distribute minerals to other parts of the body. 6. Endocrine regulation. Osteoblasts in the bone tissue release a hormone called osteocalcin that helps in the regulation of blood glucose and fat deposition. Osteocalcin increases insulin secretion and its sensitivity and reduces fat storage. d. Compare and contrast the different types of joints Joints can be classified according to their structure based on their anatomical characteristics and functionally, based on the degree and the type of movement they allow. Structurally, joints either have or do not have a space called the synovial cavity between the articulating bones and the type of connective tissue joining the bones together also differ from one type of joint and another. The following are the types of joints classified structurally: A Fibrous Joint - Syndesmosis Between Tooth and Socket of Alveolar Process Fibrous joints Fibrous joints do not have a synovial cavity and the bones are joined together by dense irregular connective tissue rich in collagen fibres. These joints are also known as immovable joints. They allow little or no movement and the three types of fibrous joints are sutures, syndesmoses and interosseous membranes. A suture consists of thin layer of dense irregular connective tissue that are only found between bones of the skull. Syndesmoses have a greater distance between the articulating surfaces and are composed of denser irregular connective tissue than in sutures. The joint between a tooth and socket of a alveolar process is an example of a syndesmosis. ...read more.

The dark band (also called anisotropic band or A band) has a mixture of thick and thin filament. There is a pale region in the middle of the dark band called as the H zone. This zone is due to thin filament not touching and it has gaps. Running down the centre of the H zone is the M line, which is a cell membrane. The light band only contains thin filaments and is also called the isotropic band or I band. Passing across the light band are Z lines which are membrane like structure. The distance between one Z line to the adjacent Z line is called sarcomere. Muscles must be stimulated by voluntary nerves. When they are stimulated a wave of electrical impulses spreads over the muscle surface membrane. The Ca ions (Ca2+) rush into the muscle cells from external tissue fluid. Ca2+ ions are stored in two different microtubule systems, T-system and sarcoplasmic reticulumn. The Ca2+ ions join up with myosin, which is then converted into an enzyme, which splits the ATP releasing energy. The released energy contracts the muscle. This process is called a contraction excitation coupling. In the 1930s Huxley and Hanson studied the mechanism of muscle contraction. They came up with the sliding filament theory. The sliding filament theory suggests that the thin filaments slide towards each other. The H zone narrows or disappears completely. The sarcomere becomes shorter as the Z lines move towards each other. Subsequently, it has been discovered that another protein, actomyosin is found between the thick filaments. These protein connections are called cross bridges. They act as a 'ratchet mechanism' and assist the thin filament to slide. When the muscle relaxes, Ca2+ ions become detached from the myosin and join up with chemicals called relaxing factors. The Ca2+ ions then leave the muscle and diffuse out into the tissue fluids. Due to muscles' elastic properties the thin filaments separate from each other, the H zone appears again, the Z lines move away from each other and the sarcomere returns to its original length. ...read more.