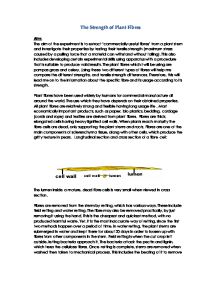 The Strength of Plant Fibres

The Strength of Plant Fibres Aim: The aim of the experiment is to extract 'commercially useful fibres' from a plant stem and investigate their properties by testing their tensile strength (maximum stress caused by a pulling force that a material can withstand without failing). This also includes developing certain experimental skills using apparatus with a procedure that is suitable to produce valid results. The plant fibres which I will be using are pampas grass and celery. Using these two different types of fibres will help me compare the different strengths, and tensile strength differences. Therefore, this will lead me on to the information about the specific fibre and its usage according to its strength. Plant fibres have been used widely by humans for commercial manufacture all around the world. The use which they have depends on their obtained properties. All plant fibres are relatively strong and flexible having long usage life. Most economically important products, such as paper, bio plastics, bedding, cordage (cords and rope) and textiles are derived from plant fibres. Fibres are thick, elongated cells having heavy lignified cell walls. When plants reach maturity the fibre cells are dead, only supporting the plant stems and roots. ...read more.

Apply a force in the centre using suspended masses, which will be the weights. The mass (or force) required to break the fibres gives a measure of tensile strength. The more masses which are added, the more strength the plant fibre has. This therefore shows to what extent it could be used for production. Testing the strength has to be repeated three times for each plant fibre, to increase reliability/validity of the data. This also reduced any systematic or random errors. When testing the fibres, the fibre has to be straight when held by the clamps. Therefore, tensile strength measurements will be more accurate, then a bent fibre holding the weights with all its mass. Diagram of Procedure: Fair Test/ Reliability: In order for reliable results, the procedure for each fibre has to be repeated at least three times. This will produce more valid results, since the fibre has been tested out a few times. Although this method isn't completely accurate, it is quick. The reason it is not completely accurate is because the weights aren't precise enough for a real result. For instance, if a fibre holds 100g and you put another 20g on, the result cannot exactly be 100g. ...read more.

When using the weights, be careful not to place them near the edge of the table. Since they will eventually fall once the fibre can no longer withstand the weight, they could fall on the foot. This will lead to pain if there were large amounts of weights. Other than the listed safety measures, there is no other including no ethical issues of this procedure. Improvement: In order to improve the results, more trials have to be carried out. When doing the tests, the fibre has to be exactly the same as the fibre used before. This includes appearance, weight, if it's not rigid and broken, length. If different fibres were used of measuring the same plant, the results wouldn't be as precise. The weights have also need to be changed, in smaller amounts. This is not only in 20g, 30g etc., but also in 2g, 5g, etc. When putting the weight on the fibre, the same amount of time has to pass between, with no pauses. Also, there could be another test to carry out on how much weight can the fibre withstand in a measured amount of time. This can be by putting a specific weight and measuring how long until the fibre breaks. Yet, this can take a long amount of time. ...read more.