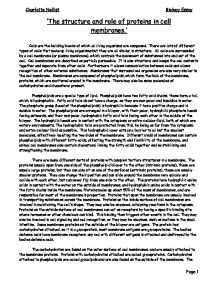 'The structure and role of proteins in cell membranes.'

'The structure and role of proteins in cell membranes.' Cells are the building blocks of which all living organisms are composed. There are lots of different types of cells that make up living organisms but they are all similar in structure. All cells are surrounded by a cell membrane (or plasma membrane), which controls the movement of substances into and out of the cell. Cell membranes are described as partially permeable. It is also structural and keeps the cell contents together and separate from other cells. Furthermore it allows communication between cells and allows recognition of other external substances. Membranes that surround cell organelles are also very similar to the cell membrane. Membranes are composed of phospholipids, which form the bulk of the membrane, proteins, which are scattered around in the membrane. There may also be some molecules of carbohydrates and cholesterol present. Phospholipids are a special type of lipid. Phospholipids have two fatty acid chains; these form a tail, which is hydrophobic. Fatty acid tails do not have a charge, so they are non-polar and insoluble in water. The phosphate group (head of the phospholipids) is hydrophilic because it has a positive charge and is soluble in water. ...read more.

Some membrane proteins on the outside of the bilayer are antigens. The protein has carbohydrates attached, so it is a glycoprotein, most membrane antigens are glycoproteins. The bodies defence cells have membrane receptors; any cell with different antigens is attacked and destroyed by the bodies defence cells. The carbohydrates are found on the outer surface of cell membranes, and are usually attached to the membrane proteins. Proteins with carbohydrates attached are called glycoproteins. Carbohydrates attached to phospholipids are called glycolipids and are also found on the outside of the membrane. The carbohydrates are short polysaccharides composed of a variety of different monosaccharides, and form a cell coat or glycocalyx outside the cell membrane. The glycocalyx is involved in protection and cell recognition. Cholesterol is also present in the membrane. It maintains the fluidity and increases the stability of the membrane. Without cholesterol the membrane would easily split apart. The way molecules are arranged in a cell membrane is described as the fluid mosaic model, because the membrane is fluid, and because of the mosaic arrangement of the protein molecules. Davson and Danielli proposed this idea in the 1970's and 1980's. Below is a diagram of the fluid mosaic model. Cell membranes are a barrier to most substances, and this property allows materials to be concentrated inside cells, excluded from cells, or simply separated from the outside environment. ...read more.

Active transport is the pumping of substances across a membrane by a trans-membrane protein pump (protein carrier) molecule. The protein binds a molecule of the substance to be transported on one side of the membrane, changes shape, and releases it on the other side. The proteins are highly specific, so there is a different protein pump for each molecule to be transported. Active transport happens when the concentration of a molecule is higher inside a cell than outside the cell, this goes against the concentration gradient so energy is required. There are also two-way pumps, which are called exchange pumps. Below is an example of one, which brings potassium into the cell and removes sodium from the cell. The processes described so far only apply to small molecules. Large molecules (such as proteins, polysaccharides and nucleotides) are moved in and out of cells by using membrane vesicles. This process requires energy as well. Facilitated diffusion and active transport both use proteins, both are specific and controllable. Active transport requires energy because it goes against the concentration gradient, but facilitated diffuse does not require energy. So proteins have a very important role in cell membranes, they help substances move into and out of the cell. Proteins provide stability in the cell membrane and are responsible for most of the membranes properties. Charlotte Nellist Biology Essay Page 1 ...read more.