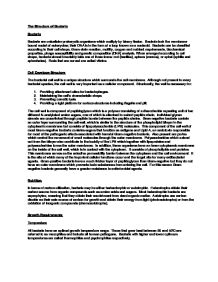 The Structure of Bacteria.

The Structure of Bacteria Bacteria Bacteria are unicellular prokaryotic organisms which multiply by binary fission. Bacteria lack the membrane-bound nuclei of eukaryotes; their DNA is in the form of a loop known as a nucleoid. Bacteria can be classified according to their cell shape, Gram-stain reaction, motility, oxygen and nutrient requirements, biochemical properties, phage susceptibility and genetic composition (DNA) analysis. When arranged according to cell shape, bacteria almost invariably take one of three forms: rod (bacillus), sphere (coccus), or spiral (spirilla and spirochetes). Rods that are curved are called vibrios. Cell Envelope Structure The bacterial cell wall is a unique structure which surrounds the cell membrane. Although not present in every bacterial species, the cell wall is very important as a cellular component. Structurally, the wall is necessary for: 1. Providing attachment sites for bacteriophages. 2. Maintaining the cell's characteristic shape. 3. Preventing osmotic lysis. 4. Providing a rigid platform for surface structures including flagella and pili. The cell wall is composed of peptidoglycan which is a polymer consisting of a disaccharide repeating unit of two different N-acetylated amino sugars, one of which is attached to a short peptide chain. Individual glycan strands are cross-linked through peptide bonds between the peptide chains. Gram-negative bacteria contain an outer layer surrounding the cell wall, which is similar to the structure of the phospholipid bilayer in the cytoplasmic membrane but consists of lipopolysaccharide (LPS) ...read more.

This amount of salt is needed to maintain the structure of the cell wall and internal molecular assemblies such as ribosomes. Bacterial Reproduction Most bacteria reproduce by a relatively simple asexual process called binary fission: each cell increases in size and divides into two cells. During this process there is an orderly increase in cellular structures and components, replication of the bacterial DNA, and formation of a septum or cross wall which divides the cell into two. The time interval required for a bacterial cell to divide or for a population of cells to double is called the generation time. Generation times for bacterial species growing in nature may be as short as 15 minutes or as long as several days. Growth Cycle Populations of bacteria grown in liquid media with limited amount of nutrients, show the following characteristic growth curve. Four characteristic phases of the growth cycle are recognized. 1. Lag Phase. Immediately after inoculation of the bacteria into fresh medium, the population remains temporarily unchanged. Although the number of cells is not increasing, the cells may be growing, synthesizing enzymes, proteins or RNA, and increasing in metabolic activity. The length of the lag phase is dependent on a wide variety of factors including the size of the inoculum, the time necessary to adapt to the new environment and the time required for the synthesis of essential enzymes or division factors. 2. Exponential (log) ...read more.

of microorganisms on living tissue. Joseph Lister first introduced aseptic surgery in 1867 when he used a spray of carbolic acid (phenol) to prevent infection. Chloroxylenol, the main constituent of Dettol, is an aromatic compound derived from phenol and is used as both an antiseptic and disinfectant. Bacterial Resistance to Disinfectants Resistance is a decrease in susceptibility or a lack of susceptibility of a microbe toward an agent. As disinfectants are non-selective in their attack, they kill bacteria on contact. As a result the development of bacterial resistance is much more difficult than antibiotic resistance and would not normally be the result of a single mutation. The only way microbes could not be killed after coming into contact with the disinfectant is if they could somehow protect their cell membrane from becoming permeated. The following mechanisms of resistance have developed: Formation of Biofilm (Extrinsic Resistance) Microorganisms have evolved with specialized structures aiding in their survival. Certain bacteria produce a gelatinous material known as exopoly-saccharide to form a biofilm. Biofilms help organisms stick to environmental surfaces and physically protect them from the penetration of disinfectants or other detrimental environmental conditions. While the bacteria that initiate biofilms are often not harmful, pathogenic bacteria may also stick to the biofilm and share the protective nature of the environment. Production of Spores (Intrinsic Resistance) Vegetative cells become spores when they're deprived of essential growth nutrients. Formed under conditions of stress and in Gram positive strains, bacterial spores can survive extreme heat, cold, drying and chemical exposures. ...read more.