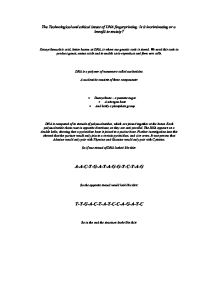 The Technological and ethical issues of DNA fingerprinting: Is it incriminating or a benefit to society?

The Technological and ethical issues of DNA fingerprinting: Is it incriminating or a benefit to society? Deoxyribonucleic acid, better known as DNA, is where our genetic code is stored. We need this code to produce genes, amino acids and to enable us to reproduce and form new cells. DNA is a polymer of monomers called nucleotides. A nucleotide consists of three components: * Deoxyribose - a pentose sugar * A nitrogen base * And lastly a phosphate group DNA is composed of to strands of polynucleotides, which are joined together at the bases. Each polynucleotide chain runs in opposite directions, so they are anti parallel. The DNA appears as a double helix, showing that a pyrimidine base is joined to a purine base. Further investigation into this showed that the purines would only join to a certain pyrimidine, and vice versa. It was proven that Adenine would only pair with Thymine and Guanine would only pair with Cytosine. So if one strand of DNA looked like this: A-A-C-T-G-A-T-A-G-G-T-C-T-A-G So the opposite strand would look like this: T-T-G-A-C-T-A-T-C-C-A-G-A-T-C So in the end the structure looks like this: (Source 1) ...read more.

* When you switch on the current, it attracts the fragments across the field. * The shorter fragments move faster than the long ones, and that sorts the fragments by size. * You attach radioactive markers to certain sequences of the DNA. For example you might label every occurrence of DADDADCAT - a different series of "letters" in DNA's alphabet. * You place the markers against a photographic film, and produce a picture showing the individual markers. * Now you repeat the process with different markers, to multiply the accuracy of the test. (Source 4) This process is known as Restriction Fragment Length Polymorphism. However a process called Polymerase chain reaction is used to produce multiple copies of segments from a very little amount of DNA. This enables a DNA fingerprint to be made from a single hair. Once a sample has been produced, the pattern of the alleles from a limited number of genes is compared with the pattern from the reference sample. A non match is conclusive, but the technique provides less certainty when a match occurs. ...read more.

This allows researchers to identify, in a particular persons DNA, the occurrence and frequency of the particular genetic pattern contained in the probe. (Source 5) Practical applications of DNA Fingerprinting. As I said before DNA can be used to determine some bodies paternity, through the use of VNTR pattern analysis which has been known to solve standard father - identification cases as well as more complicated cases of confirming legal nationality and, in instances of adoption, biological parenthood. DNA fingerprinting can be used in criminal identification and forensics, as well as personal identification. The notion of using DNA fingerprints as a sort of genetic bar code to identify individuals has been discussed, but this is not likely to happen anytime soon or in the foreseeable future! The technology required to isolate, keep on file, and then analyse millions of very specified VNTR patterns is both highly expensive and impractical - not to mention degrading for people! However it would come in handy when we need to solve a murder! (Sources 9, 8, 10 & 11) ...read more.