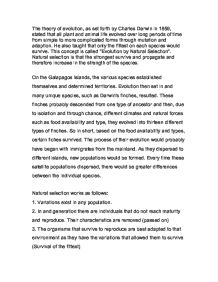 The Theory of Evolution

The theory of evolution, as set forth by Charles Darwin in 1859, stated that all plant and animal life evolved over long periods of time from simple to more complicated forms through mutation and adaption. He also taught that only the fittest on each species would survive. This concept is called "Evolution by Natural Selection". Natural selection is that the strongest survive and propagate and therefore increase in the strength of the species. On the Galapagos Islands, the various species established themselves and determined territories. Evolution then set in and many unique species, such as Darwin's finches, resulted. These finches probably descended from one type of ancestor and then, due to isolation and through chance, different climates and natural forces such as food availability and type, they evolved into thirteen different types of finches. So in short, based on the food availability and types, certain fiches survived. The process of their evolution would probably have began with immigrates from the mainland. As they dispersed to different islands, new populations would be formed. ...read more.

This made its neck and bit longer, so its offspring had necks a bit longer too. This theory, often called Lamarckism. We have seen through many real examples and observations that changes that occur in an animal during life are not passed on to the animal's offspring. If a dog's ears are cropped short, its puppies are still born with long ears. If someone exercises every day, runs marathons, eats well, and is generally very healthy, the fitness is not passed on and the person's children still have to work just as hard to get that fit and healthy. These and other examples show that Lamarck's theory does not explain how life formed and became the way it is. A basic understanding of the concept of the Dreamtime or Creation period is an important part of recognizing the inextricable bond traditional Aborigines have for the land and their culture. Traditional Aborigines believe the earth, like the sky, always existed and was the home of supernatural beings. At the beginning of time the earth looked like a featureless, desolate plain. ...read more.

Example- Dinosaurs lived before us. We are being tested and trial-led with challenges here on this Earth. It is by our faith and righteousness that we may return to be with him. In conclusion, the idea that there is a lack of evidence to prove the age of the earth and the theory of the evolution of life is simply incorrect. Some may claim that there is no proof that the earth is old, but there is no scientific evidence that it is young. There is a lot of conclusive evidence supporting the fact that earth has been here for billions of years. The evidence of the earth being so old is what gave rise to modern theories of natural selection. The major reason that this theory even exists is because the assumption was made that the earth is old. Charles Darwin was able to come up with the theory of evolution due to the assumption that evolution occurs over a long period of time. Until someone can prove his entire theory and not just some of its "sub theories" wrong, it is and will continue to be the most accurate explanation of how life on earth came to be. ...read more.