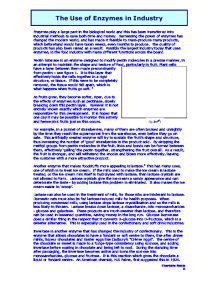 Enzymes play a large part in the biological world and this has been transferred into industrial methods to save both time and money.  Harnessing the power of enzymes has changed the modern world, and has made it feasible to mass-produce many products, which beforehand would have taken weeks, even months to produce.  The quality of products has also been raised as a result.  Possibly the largest industry today that uses enzymes, is the food industry with many different functions across the board.

Pectin Esterase is an enzyme designed to modify pectin molecules in a precise manner, in an attempt to maintain the shape and texture of food, particularly in fruit. Plant cells have a layer between them made predominantly from pectin – see figure 1.  It is this layer that effectively holds the cells together in a rigid structure, or tissue.  If this were to be completely removed, the tissue would fall apart, which is what happens when fruits go soft. 1

As fruits grow, they become softer, riper, due to the effects of enzymes such as pectinase, slowly breaking down this pectin layer.  However it is not entirely known exactly which enzymes are responsible for this development.  It is hoped that one day it may be possible to monitor this activity and hence pick fruits just as this occurs.

For example, in a punnet of strawberries, many of them are often bruised and unsightly by the time they reach the supermarket from the warehouse, even before they go on sale.  This artificially created enzyme will try to sustain the fruit’s shape and structure, thus increasing the number of ‘good’ strawberries in the product sold.  By stripping the methyl groups from pectin molecules in the fruit, links and bonds can be formed between them, effectively ‘gelling’ the pectin together, strengthening the fruit overall.  As a result, the fruit is stronger, and will withstand the knocks and blows more effectively, leaving the customer with a more attractive product.

Another enzyme that makes foodstuffs more appealing is lactase.2 This has many uses, one of which is to treat ice cream.  If the milk used to make the ice cream is lactose treated, or the ice cream mix itself is hydrolysed with lactase, then lactose crystals are not allowed to form.  Lactose crystals give the ice cream a sandy appearance and can deteriorate the taste - by adding lactase this problem is eliminated.  It also makes the ice cream easier to ‘scoop’.

Lactase can also be used in the treatment of milk, for those who are intolerant to lactose.  Domestic cats must also be fed lactose-reduced milk for health purposes.  When producing condensed milk, using lactase stops lactose crystallisation and so the milk is less likely to thicken.  Lactase breaks down lactose, a disaccharide, into monosaccharides - glucose and galactose.  These products are much sweeter than lactose, and therefore can be used in lessened quantities, saving money in the long run.  Glucose Isomerase does a similar thing in the respect that it converts D-glucose into D-fructose, which is a sweeter alternative.  This is especially used in the confectionary and soft drink industries.

Invertase is another enzyme that has changed the industry of confectionary.  This is the enzyme that allows chocolates to have a fondant or soft centre to them, like after dinner mints, liqueur chocolates and Easter eggs like Cadbury’s “Crème Eggs”.  The centre of the chocolate or sweet is made to a fudge-type consistency using sucrose, and adding invertase before coating in chocolate and being left to cool.  During the standing time after packaging, the invertase becomes active and turns the sucrose into monosaccharides, glucose and fructose.  It is this reaction which gives the chocolate a liquid or fondant centre.  An American chemist, H.S Paine, first suggested this in 1924.

Beer brewing is another major industry that relies on the use of enzymes, this time a living one; yeast, in its production. Essentially, yeast acts on barley, maize, hops and other such plant products to produce ethanol – alcohol.  They do this by converting sugars into alcohol and carbon dioxide, but the sugars in these plant products are very complex, in the form of starch, and cannot be made use of efficiently.  Therefore, the barley is left to germinate a little, which releases enzymes that catalyse the conversion of complex carbohydrates into simple sugars.  The grains are then dried and roasted, killing off the germinating sprouts. The grain is cracked, sprouts removed and crushed to help convert more sugars and kill bacteria in the grain. More sugars are created from the complex carbohydrates in the grain by applying heat.  Chemical bonds break and the resulting pieces are smaller, simpler sugars, which can be easily fermented by the yeast.  Hops and flavourings are added and boiling helps kill any remaining bacteria that may compete with the yeast. This mixture, wort, is then cooled to the optimum temperature for the specific variety of yeast, which is then left to ferment, producing alcohol.

Unfortunately this is quite an expensive process, and difficult to control effectively, so industrial enzymes such as amylase, glucanase and protease can be added for more efficient and controlled alcohol production.  When this is being filtered, viscous polysaccharides can slow down the process.  By pre-treating with xylanase or glucanase, these polysaccharides are broken down, speeding up filtration and making the procedure much more economical and cost-effective.

Fruit juices also use enzymes in their manufacture, let us use apple juice as an example for non-citrus fruits.  In unripe fruit the pectin that makes up a lot of the cell wall, is insoluble, but as the fruit ripens, some of the pectin chains are broken down and thus the tissue softens.  As a result, this becomes soluble and when the apple is crushed some of this pectin is taken, along with the juice.  It is this that makes the juice have a hazy appearance.  Once all the apples have been crushed, they are incubated, along with pectinase, which breaks up the soluble pectin, allowing the juice to flow more freely.  However, this enzyme also breaks down insoluble pectin, which can thicken the juice again.

If a cloudy product is wanted, then the apples are pressed and pasteurised (heated to a high temperature quickly) immediately to denature the enzymes.  This is then centrifuged to removed large pieces, whereas small pieces are left in suspension – giving the cloudy appearance.  If a clear juice is required, these small particles must be removed.  Some soluble pectin is still left in the juice, which means that filtering would not work.  It must be treated with pectinase again to remove this.  Starch may also have caused the juice to be cloudy, and this is also removed used an enzyme.  Amylase is often added at the same time as pectinase to solve this problem.  This is then centrifuged to remove all the debris and the enzymes, and then a clear juice is produced.3

Citrus fruits however must be made into juice using a different method.  The juice is much harder to extract in citrus fruits, because the pectin holds the liquid in.  For that reason, pectinase must be used to remove the pectin itself and allow the juice to come free from the fruit pulp.  It is important that some of the insoluble pectin remains in the juice to give it a cloudy appearance.  It is possible to use artificial agents to produce the same effect, but these are illegal in many countries.  Instead pectinase is used.  This is ironic as one would think that this enzyme would break down the pectin, but we must remember that pectin is not one single substance, but a group of polysaccharides.

If the juice is not cloudy enough, more pectin must be added.  This is found in abundance in the white layer, pith, beneath the skin of most citrus fruits.  By grinding this, mixing with water and boiling, the tissue is softened and after cooling, pectinase is added.  This breaks down the peel tissue forming a cloudy liquid containing cellulose, pectins, and cell organelles.  By pasteurising to denature the enzymes, centrifuging to remove the cell organelles and concentrating, the process is complete and this can be added to the existing juice.

Although the food industry is probably the largest user of enzymes, the best-known application of them is in detergents and washing powders.4 They have been used since the 1960’s in this way.  The main enzyme in laundry detergents is protease, which breaks down proteins such as grass stains, many food products, blood and human sweat.  Recently however, this has been improved, to include a mixture of enzymes, incorporating lipases to acts on stains from fat-based products like oils, grease, makeup, and amylases, which act on starchy food types.  Colour-enhancing washing powders have also been introduced which contain cellulases, which are there to remove cellulose fibrils, which dull the colour of the clothing over time.

Many companies have developed a pre-soaking detergent and spot application for tougher stains.  Enzymes contained in these are much stronger than those in the normal detergent, and aim to loosen the soiling before the main wash.  This would save money on detergent costs, and also save on energy, as clothes could be washed at a lower temperature.  The same principle can be applied to dishwashing detergent, which also contains protease and amylase to remove food particles from crockery.  These are also more environmentally friendly as they contain less bleach and phosphates.5

Although the uses of enzymes are largely beneficial, there are some issues that are still under discussion.  For example, large scale productions of such enzymes is proving costly and is also having an effect on the environment.  Many would argue that nature had not intended for humans to interfere and change its path and some would even call it “playing God”.

Many investigations are currently being carried out to explore the possibility of multi functioning enzymes.  For example Limonoid Glucosides are known to stop citrus juice turning bitter, but recent studies have shown that they also inhibit the growth of tumour cells, including human cancer cells.  Enzymes are an extremely important part of the biological world, and the extent of their power is only beginning to be realised.  Our increasing knowledge of DNA technology also means that we could have the ability to construct enzymes from amino acids for specific purposes, once we know the coding required.  This would create endless possibilities and could be particularly groundbreaking in the medical field.

The genes for several potentially useful enzymes have been identified, but a lot of work must be done before these are approved and accepted for general usage. This must be thought through very carefully before being put into practice. On the whole, enzymes contribute extensively to the industry so that demands on both quantity and quality can be met.