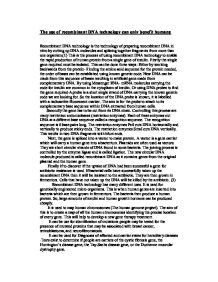 The use of recombinant DNA technology can only benefit humans

The use of recombinant DNA technology can only benefit humans Recombinant DNA technology is the technology of preparing recombinant DNA in vitro by cutting up DNA molecules and splicing together fragments from more than one organism.(1) This is the process of using recombinant DNA technology to enable the rapid production of human protein from a single gene of insulin. Firstly the single gene required must be isolated. This can be done three ways: Either by working backwards from the protein- Finding the amino acid sequence for the protein needed, the order of bases can be established using known genetic code. New DNA can be made from this sequence of bases resulting in artificial gene made from complementary DNA. By using Messenger RNA- mRNA molecules carrying the code for insulin are common in the cytoplasm of insulin. Or using DNA probes to find the gene required-A probe is a short single strand of DNA carrying the known genetic code we are looking for. So the location of the DNA probe is known, it is labelled with a radioactive fluorescent marker. ...read more.

Cells that have not taken up the DNA will be killed by the antibiotic. (3) Recombinant DNA technology has many different uses. It is used for genetically engineered micro organisms. This is when human genes are inserted into bacteria which are then grown in fermentors. The bacteria then produce a human protein. So, large amounts of insulin and human growth hormone can be produced cheaply. It is used to map human chromosomes (The human genome project). The aim of this is to create a map of all the human chromosomes identifying the precise location of every gene. This will help to develop a new gene therapy treatment It can be use for identification of mutations-people may be tested for the presence of mutated proteins that may be associated with breast cancer, retinoblastoma, and neurofibromatosis. It can be used for Diagnoses of affected and carrier states for hereditary diseases -Tests exist to determine if people are carriers of the cystic fibrosis gene, the Huntington's disease gene, the Tay-Sachs disease gene, or the Duchenne muscular dystrophy gene. ...read more.