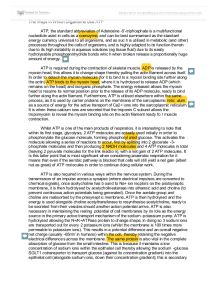 The Ways in Which Organisms Use ATP

The Ways in Which Organisms Use ATP ATP, the standard abbreviation of Adenosine-5'-triphosphate is a multifunctional nucleotide used in cells as a coenzyme, and can be best summarised as the standard energy currency universal to all organisms, and as such is utilised in metabolic (and other) processes throughout the cells of organisms, and is highly adapted to its function therein due to its high instability in aqueous solutions (eg tissue fluid) due to its easily hydrolysable phosphoannhydride bonds which when broken release a proportionally huge amount of energy. ATP is required during the contraction of skeletal muscle. ADP is released by the myosin head, this allows it to change shape thereby pulling the actin filament across itself. In order to detach the myosin molecule (for it to bind to a myosin binding site further along the actin) ATP binds to the myosin head, where it is hydrolysed to release ADP (which remains on the head) and inorganic phosphate. The energy released allows the myosin head to resume its normal position prior to the release of its ADP molecule, ready to bind further along the actin filament. ...read more.

Once the acetate group and choline are reabsorbed by the presynaptic membrane, ATP is then hydrolysed and the energy is used alongside choline acetyltransferase to resynthesise acetylcholine, ready to be secreted from their vesicles should another action potential arrive. ATP is also necessary in maintaining the resting potential of cell membranes by its role as the energy source in the primary active transport mechanism of the sodium-potassium pump. ATP is hydrolysed allowing the N+/K+ATPase protein to change shape; in doing so 3 sodium ions are transported out for every 2 potassium ions (whilst the membrane is 100 times more permeable to potassium ions). This results in a potential difference and an overall negative net charge (usually -65mV in humans) within the cell, thereby retaining the negative electrical differences across the membrane. The same protein is also vital in the complete absorption of glucose from the small intestine. This is because it maintains a low concentration of sodium ions within the epithelial cell thereby allowing the sodium-glucose SGLT1 cotransporter to transport glucose (against its concentration gradient) ...read more.

The tRNA molecule in its activated state can then be used in the translation stage of protein synthesis. ATP is also necessary in the regulation of blood glucose levels alongside the hormone adrenaline, where it again (though indirectly) acts as a signalling molecule. When adrenaline binds to its complementary adrenergic receptors, it activates an enzyme inside the cell membrane which converts ATP to cAMP. The cAMP then acts as a signalling molecule (a 'second messenger') which activates other enzymes to convert glycogen into glucose, thereby increasing blood glucose concentration of the body which is necessary for the fight or flight response when more metabolic activity will be occurring thereby requiring more respiratory substrate. In conclusion, whilst ATP serves its function well as an energy input molecule for metabolic reactions, it has also been interesting to note its various other functions not least as a extracellular signalling molecule but also for its input in respiration in order to yield yet more ATP as a result. And considering the vast areas of effect that it has on cellular processes it can be concluded without fear that ATP is one of the most important molecules in plant and animal biology. ...read more.

A thorough and well structured report, which could be improved by:
1) The addition of references
2 Some brief explanations of key terms, processes and molecule roles
3)Attention to formatting
4)Clarification of exactly how it is that ATP supplies the energy for metabolic processes, in terms of energy release during bond formation