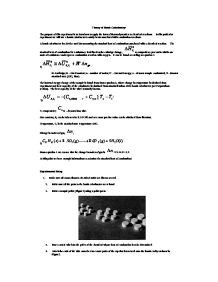 Theory of Bomb Calorimetry: The purpose of this experiment is to learn how to apply the laws of thermodynamics to chemical reactions. In this particular experiment we will use a bomb calorimeter to study heats associated with combustion reactions. A bomb calorimeter is a device used for measuring the standard heat of combustion associated with a chemical reaction. The standard heat of combustion for a substance is defined as the enthalpy change, accompanies a process in which one mole of a substance undergoes a combustion reaction with oxygen. It can be found according to equation 1. 1) H- Enthalpy; R - Gas Constant; n - number of moles; U - Internal Energy; s - denotes sample combusted; 0 - denotes standard state (25C, 1bar). ...read more.

2. Make sure all the parts to the bomb calorimeter are at hand. 3. Make a sample pellet (Figure1) using a pellet press. 4. Fuse a metal wire into the pellet of the chemical whose heat of combustion is to be determined 5. Attach the ends of the wire onto the two center poles of the cap that is screwed onto the bomb cavity as show in Figure2. 6. Screw the lid onto the bomb cavity (make sure that the lid is on tight). At this point your bomb should look like the bomb in Figure3. Warning: DO NOT ALLOW THE BOMB TO SHAKE ONCE THE PRESSURE INSIDE IT HAS BEEN INCREASED. 7. Close the bomb valve and raise the pressure inside the bomb with the help of a pressure tank until 25 atm is reached. 8. ...read more.

Allow system to run for 5-10 minutes. 19. Ignite the pellet with the ignition unit and continue to measure the temperature until 5 minutes after the temperature peaks. 20. Unplug all the electrical connections. 21. Next remove jacket lid, and remove the bomb from the water 22. In a designated area of the class room release the gas inside of the bomb by opening the pressure release valve. 23. Once all the gas is removed, unscrew the cap and measure the mass of wire remaining, and ensure that all of the pellet was combusted 24. Begin the calculation process (refer to the theory section). - Calculations In performing the calculations the data recorded in this experiment needs to be used to make a Time versus Temperature graph. The graph should be similar to the following graph. ...read more.