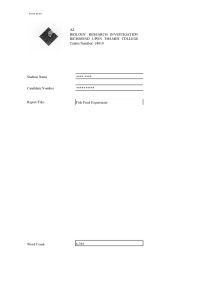 This experiment aims to investigate the effects of 4 different types of fish food on the growth of guppy fry.

**** **** Student Name Candidate Number Report Title: Word Count A2 BIOLOGY RESEARCH INVESTIGATION RICHMOND UPON THAMES COLLEGE Centre Number: 14619 **** **** ********** Fish Food Experiment 8,765 **** **** Fish Food Experiment Aim This experiment aims to investigate the effects of 4 different types of fish food on the growth of guppy fry. The fish foods to be tested are TetraPrim a Tropical, Aquarian Tropical Flakes, Freeze-Dried Brine Shrimp and Natural foods such as mosquito larvae, algae and daphnia in which guppy fry feed on in the wild. Introduction Guppies (Poecelia reticulata) are renowned for the resilience in conditions much different from their normal habitat. Their survival rate in captivity is far greater than that of the wild, and they are extremely prolific breeders in almost all conditions . Unlike many other species of freshwater fish like Goldfish and Cichlids, guppies don t require any special conditions to breed and have been bred easily through natural means in bare glass tanks. Their hardiness also extends into the water conditions they can survive in. Guppies prefer harder and slightly alkaline conditions, however they have been successfully bred in acidic conditions and even in saline solutions exceeding that of sea-water when acclimated slowly. While it may not be immediately apparent, this experiment has a very important real world implication. In the wild, salmon are carnivorous and feed mainly on zooplankton and small invertebrates, and eventually feed on larger fish la ter on. Because of their position in the food chain, salmon have a considerable amount of Omega 3 fatty acids in their bodies and this is one of their draws to the end consumer. Some research has shown that the consumption of Omega 3 fatty acids reduces the likelihood of heart disease and is a important component in cognitive functioning (15). As well as being a source of omega-3 fatty acids, salmon are also very high in protein as well as vitamin D (13). ...read more.

The thermometers used measure the temperature to the nearest 0.1? which is adequate for ensuring the tanks are al the same temperature. � Camera and ruler guide; Used to measure the growth of fry. The measurements taken can be very accurate as distance can be judged with the subject still in software. � Water conditioners and resins; Used to remove harmful chlorine from the domestic water supply and to ensure that the constant output of ammonia from the fry is kept under control. � Air Pump; used to circulate the water in the tank using the " air-lift" principle, bringing oxygen rich surface water to the bottom of the tank and vice-versa. A 4 way splitter and diffuser was used to prevent excessive water movement in the fry tank which could cause stress. � Infusoria Tank; This tank is kept near a hot window and contains aquatic fertilisers and organic matter which feeds and encourages the growth of micro-organisms one group of fry will feed on. � Guppy Fry; The fry used in this experiment have been separated from the main tank and kept under normal conditions with a varied diet for 2 weeks. This is to ensure that we can select healthy fry for the experiment. Deformed fry such as those with bent spines or common "belly-sliders" who have a dysfunctional swim-bladder ar e culled and not used in the experiment. Problems with Original Procedure The trail procedure quickly showed major flaws in th e design of the experiment concerning accuracy of measurements and physical limitations of the way the fry are kept. � Calculating Fry Growth: Originally, the growth of the fry would be calculated by wet mass, which theoretically would have been the best way to measure mass. In practice however, even with extremely sensitive scales (0.001g), it was difficult to determine the mass of the fry. It was found that a single fry would have very different masses when weighed within minutes of each other. ...read more.

This problem was somewhat alleviated by keeping the fry in a sizeable tank. The size of tanks the fry are kept in can have a large impact on their wellbeing. Even if water quality is carefully monitored, it is important to ensure that each animal has enough personal space. This is because even though guppy fry prefer to shoal and aren t territorial, they require a physical space between them to avoid stress. The same concept has also been shown in humans and other animals such as deer; research has found that deer kept in overcrowded conditions tend to live shorter lives regardless of diet or infection and human violence is much more prevalent in overcrowded conditions (12). Culling of deformed fry has been debated, i.e. "We should care for them as we have the resources to do so". Keeping deformed fry and allow ing them to breed would cause future generations in the gene pool to suffer from the same problems, and deformities such as spinal problems or belly-sliding would be painful and also make them vulnerable to other boisterous individuals in the tank. Deformed fry usually never survive for more than 2 weeks, and it is important that if they are to be culled, it is done as humanely as possible. There are many methods of culling fry, including temperature shock, destruction of the brain or anaesthetic overdose, each method works for different species/sizes of fish. The preferred method of culling guppy fry is to immerse the fry in a 1 drop per litre emulsion of clove oil ( 70% eugenol) which acts as an anaesthetic to allow the fry to "sleep". Once gill movement slows, 100ml of Vodka (37.5% ethanol) is then added to kill the fry in the sleep state. **** **** The fry are then kept in freezing water which guarantees death (doing this is preferred as tropical fish do not "hibernate" in cold conditions like cold -water fishes do). ...read more.