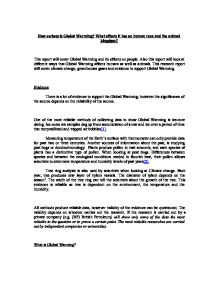 How serious is Global Warming? What effects it has on human race and the animal kingdom? This report will cover Global Warming and its effects on people. Also this report will look at different ways that Global Warming affects humans as well as animals. This research report will cover climate change, greenhouses gases and evidence to support Global Warming. Evidence There is a lot of evidence to support the Global Warming; however the significance of the source depends on the reliability of the source. One of the most reliable methods of collecting data to show Global Warming is ice-core dating. Ice cores are samples dag up from accumulation of snow and ice over a period of time that recrystallized and trapped air bubbles[1]. Measuring temperature of the Earth's surface with thermometer can only provide data for past two or three centuries. Another sources of information about the past, is studying peat bogs or dendrochronology. Plants produce pollen in vast amounts, and each species of plants has a distinctive type of pollen. When looking at peat bogs. Differences between species and between the ecological conditions needed to flourish best, their pollen allows scientists to determine temperature and humidity levels of past years[2]. ...read more.

Also the lack of commitment of human race to healthy life styles caused the car manufacturers to increase the car production in recent years. Everyone wants to own at least one car, but they don't think about consequences of that. Many more cars cause a lot of emission of CO2 into the atmosphere. Greenhouse Gas Formula Contribution (%) Water Vapour H2O 36-70 Carbon Dioxide CO2 9-26 Methane CH4 4-9 Ozone O3 3-7 The raising temperature causes more water to vaporise, which leads to more UV light being trapped by the atmosphere, therefore the increase in the average temperature. [4] As the graph above shows over a period of hundred years there is a positive skew, which indicated the increases in temperature. The increase is around 1oC, which could suggest a fast increases in surface temperatures. Environmental implications The increases in the concentration of greenhouses gases in the atmosphere, the possibility of acidic rains increases. Acid rains are caused by emissions of compounds of ammonia, carbon, nitrogen, and sulphur which react with the water molecules in the atmosphere to produce acids.[5] The below diagram shows the damage to the European Forests caused by Acid rain and Air pollution. ...read more.

In the UK not many houses are solar powered as the installation of PV cells is very expensive.[7] It is important that the developing countries lower their gases emission and start to use renewable sources of energy as the consumption is going up along with the CO2 emission. The industrialized countries are around 24% of world population and use about 75% of energy. Along with that they account for 73% of CO2emission in the combustion of fossil fuels. Meanwhile, it is projected that energy consumption will increase primarily in the developing world related to the population growth and the ongoing industrialization in the future.[8] Another way of lowering carbon emission was introduced by the car industries which introduced hydrogen powered cars. In hydrogen combustion water is given out when hydrogen is used as a fuel. It can be seen that Global Warming is a serious issue even to the government, as the mayor of London decided to have 8 hydrogen powered buses by 2012. It sound like it is not a lot but still developing hydrogen powered engines are very expensive. [9] [1] http://en.wikipedia.org/wiki/Ice_core January 2010 [2] 'Salters-Nuffield Advanced Biology for A2 Biology' -university of York science education group, 2009. [3] 'The inconvenient truth'-Gore A. Production: 2006 [4] www.env.go.jp [5] www.wikipedia.org [6] www.env.go.jp [7]AQA Physics B: Physics in content- Mike Bowes-Jones and Ken Price, 2008 [8] www.env.go.jp [9] www.wikipedia.org ...read more.