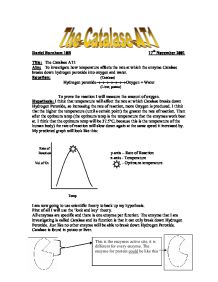 He is a diagram to illustrate this: I have also found different wording on the collision theory that I have just explained. (And a slightly different diagram) Chemical reactions only occur when reacting particles collide with each other with sufficient energy to react. As I found from before: The minimum amount of energy required to cause this reaction is called the ACTIVATION ENERGY. When the temperature increases, the particles move faster, resulting in an increased number of collisions, and an increased rate of reactions. Also, the particles collide more energetically and therefore are more likely to react. Enzymes This is also some more research that I have done to help me with backing up my hypothesis-it is about the enzymes themselves. Enzymes can be extracted from organisms in a purified form and then used in all sorts of scientific and industrial processes. An everyday use of enzymes in the home is in biological washing powders. A variety of protein-digesting enzymes are added to the powder. They are said to dissolve protein stains. ...read more.

However the digestive enzymes in the stomach work best in acid conditions), and those in the small intestine work best in alkaline conditions. (If I wanted to extend the investigation I could set up an experiment to see how acidic/alkalinity solutions affect how Catalase work) With out enzymes the reactions that they perform would be so slow that life would grind to a halt. Enzymes are made inside cells. Once formed the enzyme may leave the cell and exert (perform) its action outside. These enzymes that do this are called extracellular enzymes. They include the digestive enzymes that break down food substances in our gut (like the enzyme we are investigating) Other enzymes exert their action inside the cell they are called intracellular enzymes. Their job is to speed up the chemical reactions occurring in our cells, but not only speeding up the reactions they also control them. Anything that helps substrates to come into contact with the right enzymes will make enzyme-controlled reactions go faster. For example, raising the temperature will increase the random movements of the molecules and increase the chances of substrate and enzyme colliding-but the temperature must not be raised to much or the enzyme will be destroyed. ...read more.