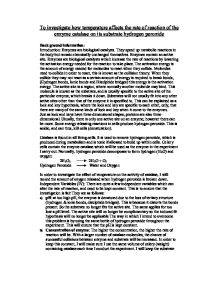 To investigate how temperature affects the rate of reaction of the enzyme catalase on its substrate hydrogen peroxide Back ground information: Introduction: Enzymes are biological catalysts. They speed up metabolic reactions in the body but remain chemically unchanged themselves. Enzymes contain an active site. Enzymes are biological catalysts which increase the rate of reactions by lowering the activation energy needed for the reaction to take place. The activation energy is the amount of energy needed for molecules to react when they collide. Molecules need to collide in order to react, this is known as the collision theory. When they collide they may not react as a certain amount of energy is required to break bonds, (Hydrogen bonds, Ionic bonds and Disulphide bridges) this energy is the activation energy. The active site is a region, where normally another molecule may bind. This molecule is known as the substrate, and is usually specific to the active site of the particular enzyme, which breaks it down. Substrates will not usually fit into any other active sites other than that of the enzyme it is specified to. This can be explained as a lock and key hypothesis, where the lock and key are specific to each other, only, that there are many of the same kinds of lock and key when it come to the enzymes. Just as lock and keys have three-dimensional shapes, proteins are also three-dimensional. Usually, there is only one active site on an enzyme; however there can be more. Some energy releasing reactions in cells produce hydrogen peroxide. This is acidic, and can thus, kill cells (denaturation). Catalase is found in all living cells. It is used to remove hydrogen peroxide, which is produced during metabolism and is toxic if allowed to build up within cells. Celery cells contain the enzyme catalase which will be used as the enzyme in the experiment I carry out. ...read more.

Considering the above, it is feasible to say that the results obtained during the experiment are neither likely to be very reliable nor very accurate. Considering that the there was so much possibility for inaccuracy, there were not however, any major anomalies in the results obtained. These slight anomalies may have arisen may have arisen due to a number of reasons: a) Improper measurement off measuring cylinder b) Improper surface area of celery, and effectively enzyme c) Difference in temperature due to loss of heat (kinetic energy) d) pH level may have altered If I was to conduct the experiment again, I would make sure that it was more accurate overall. This would ensure that the results obtained were more reliable and accurate. I would do this in the following ways: 1) I would use a graduated syringe, instead of a measuring cylinder as this would ensure that it was easier to measure the volume of oxygen produced. It would also be more accurate as there would be a clear line to mark the amount of oxygen produced. 2) I would use a greater volume of water to ensure that the temperature of the reactants remained constant, due to the fact that water is such that, the greater the volume, the greater its ability to retain heat. 3) I would use a buffer to control the pH of the reactants as it would ensure that the pH remained constant. 4) I would also use a graduated syringe to measure out the amounts of hydrogen peroxide, and other fluids. The reasons for this are the same as the ones mentioned above. With the above taken into account, I would say that my conclusion is in fact, not very safe due to the fact that there were too many errors and uncertainties concerning the results obtained. Subsequently, the results do not provide a very stable evidence for support of my hypothesis. Although the percentage error of individual equipment may have been at first glance, small, they add up to large percentage errors which then render useless, the legitimacy of the results obtained ...read more.