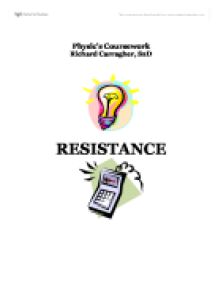 To Investigate how the thickness of a wire affects its Resistance.

Physic's Coursework Richard Carragher, S2D RESISTANCE AIM: To Investigate how the thickness of a wire affects its Resistance. Background Knowledge. The electrical supply can be quite easily compared to the water supply we all have in our homes for our heating. The battery can be easily compared to a water pump as they both have to push a flow around a circuit. A resistor can also easily be compared to a water flow constrictor, both slowing down the flow and power of the push. If the voltage is increased the current is increased. If you increase the resistance the current is decreased. CHARGE = CURRENT x TIME Q = I x T The current I with a value ampere, 1A is the number of charges flowing past a point every second. Charge Q is measured in Coulombs, C. Short Circuit: A short circuit happens when the current in a circuit travels along the easiest path it can find. The easiest path is always the one with the least resistance. ...read more.

I will measure the current with an ammeter. I will change the thickness by putting the wires in parallel. I will keep the material the same by using constantan wire. I will keep the temperature the same by only turning the circuit on for a few seconds so the current will not heat up the wire. I will keep the length of resistance wires the same by measuring the length of a wire using a meter stick. The ammeter will be in series to measure the current. The voltmeter will be in parallel to measure the voltage. Prediction I predict the more wires in parallel will create less resistance. Comparing the electrical system to a traffic system whenever six cars are in one lane the traffic moves slowly but when that lane is split into more lanes the traffic speeds up. The current starts at 12A in one wire but when we introduce another wire the current is split between the two wires. The more wires that are introduced in parallel the more the current will be split therefore increasing the overall current. ...read more.

Graphs Conclusion By looking at my results I can conclude that the more wires there is in parallel the more the resistance in the wires will decrease and there will be more current flowing though the circuit. This is because the added wires in parallel are the same as decreasing the thickness of the constantan wire. The higher we put the voltage the more current we push though the circuit. This is exactly as I predicted and it shows that comparing the electrical system to a traffic system actually proves that the more wires there is the more the resistance will decrease. This shows that there is a higher current so the more wires we put in parallel the more we increase the electrical current. Evaluation If I were doing the experiment again I would change the length of the wires as well as change the thickness. I would do this so I could get a better overall picture of how resistance is affected in a circuit. I would make the electricity wasn't on for as long so the wires would not heat up much - as this can affect my readings. I would measure the wires more accurately so no two wires were different. ...read more.